Top Posts
A Surprising Location for a Portrait
Leasey Family Portraits in Studio
A Before & After from Photoshop Retouching
An Orem Wedding in the Time of COVID-19
Maya’s Fashion Portraits on the Bonneville Salt Flats
Dave & Doug’s Family Photo Shoot in Big...
Children Photo Shoot in Big Springs Park in...
Autumn Portrait Season is Around the Corner
Time is Running Out to See the NEOWISE...
Senior Portraits with Maren on Provo’s Center Street
Home Landscape Best Time for Photography on the Bonneville Salt Flats
LandscapePortrait Photography

Best Time for Photography on the Bonneville Salt Flats

Location, location, location… those can be the deciding factor for a great photograph. Sure an abandoned alleyway with graffiti is a cool location for portraits, however, if you have a location like the Bonneville Salt Flats, that is hard to beat. 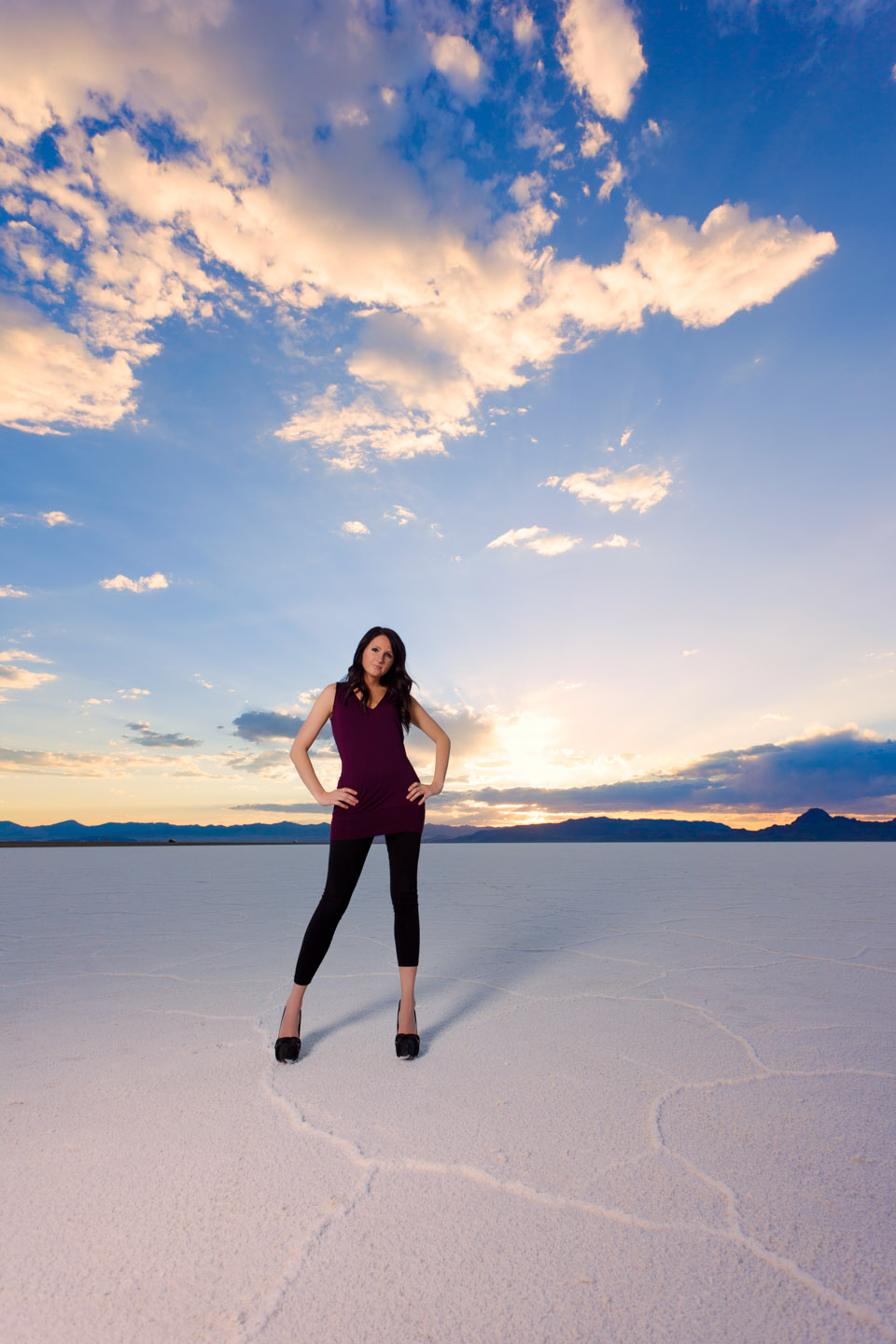 Samantha’s portraits as the sun begins to set

The question is: When is the best time for portraits on the Bonneville Salt Flats? I recommend late July to October. The reason being, they are the most dry during this time. During the rest of the year the salt flats are either covered in water or they are wet with pockets of standing water that may not be visible to the naked eye. There have been times where cars get trapped in the Salt Flats. 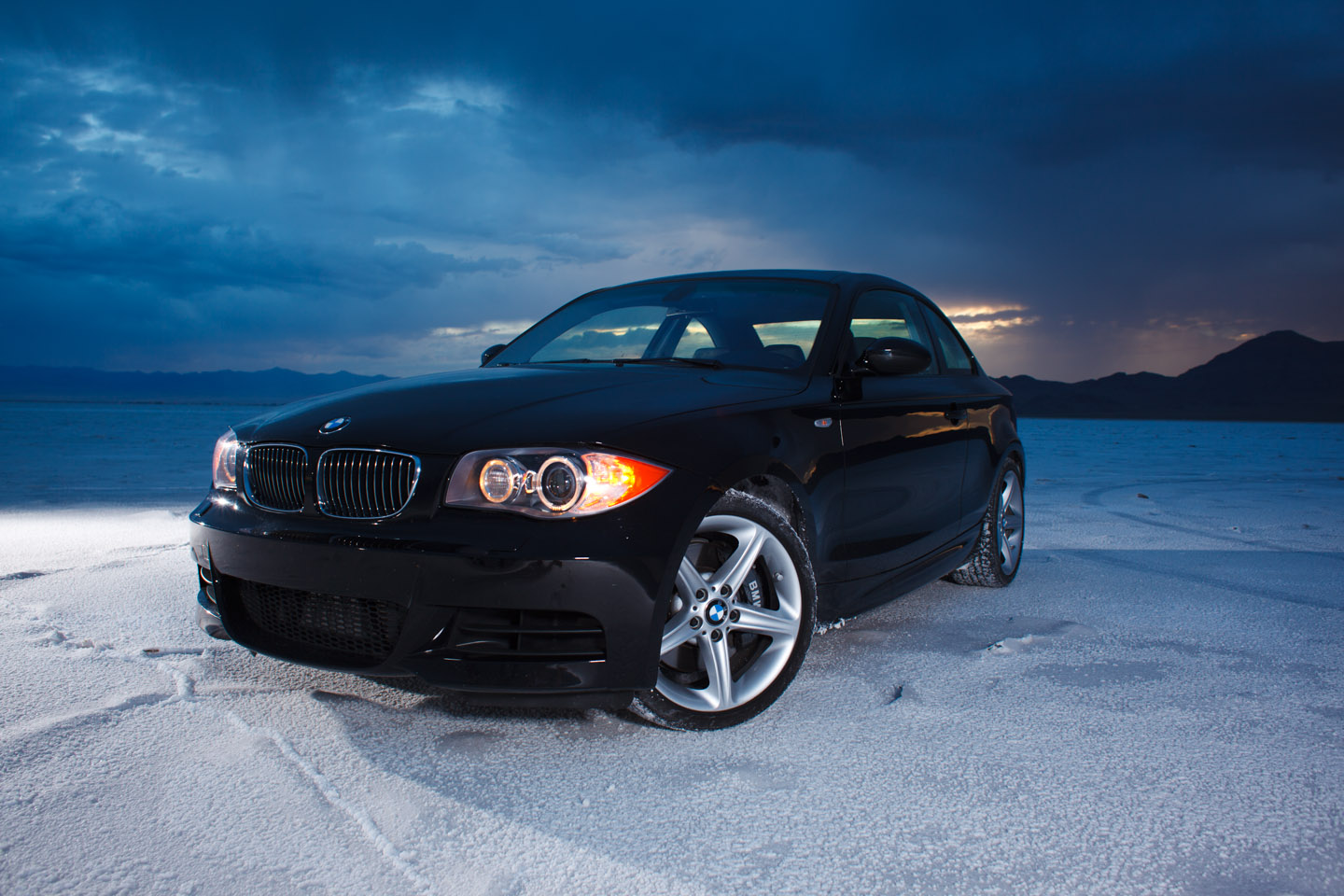 A BMW on the Bonneville Salt Flats

I love photographing on the salt flats. It is other worldly. Find the right spot and you have white salt that goes on for miles in any direction. There are some mountains to the west. You can photograph there at almost anytime. I typically will bring my big studio lights for power. 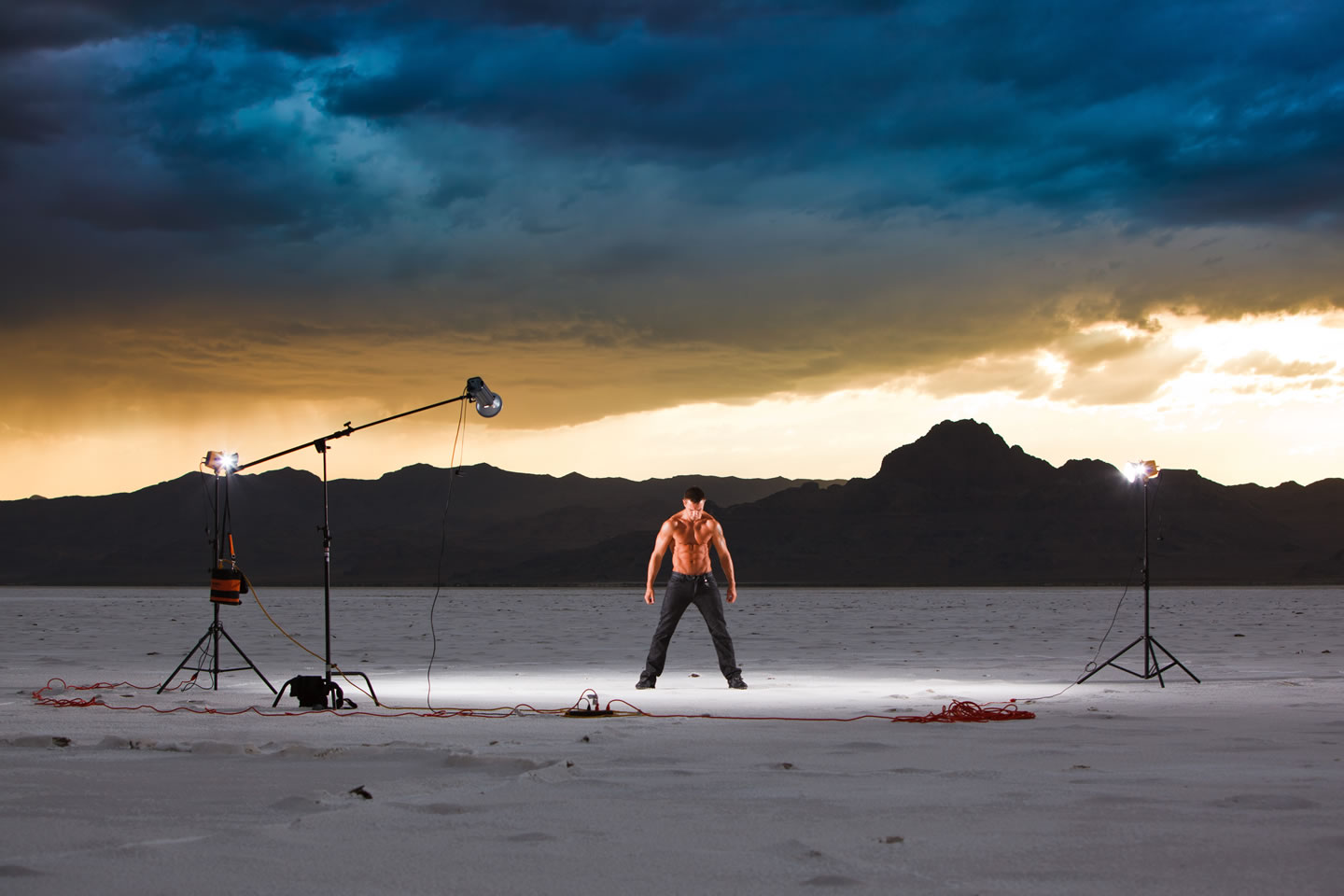 Jacob and my studio lighting on the Bonneville Salt Flats

It’s a chance to get creative. Some people will bring props such as chairs, tables, picnics, or a BMW. Sometimes the weather cooperates, other times you get a storm. I love it most when there is almost a storm. You have great storm clouds over the white salt. The downside, it may actually rain and that is when we throw the camera gear and lighting into the car. 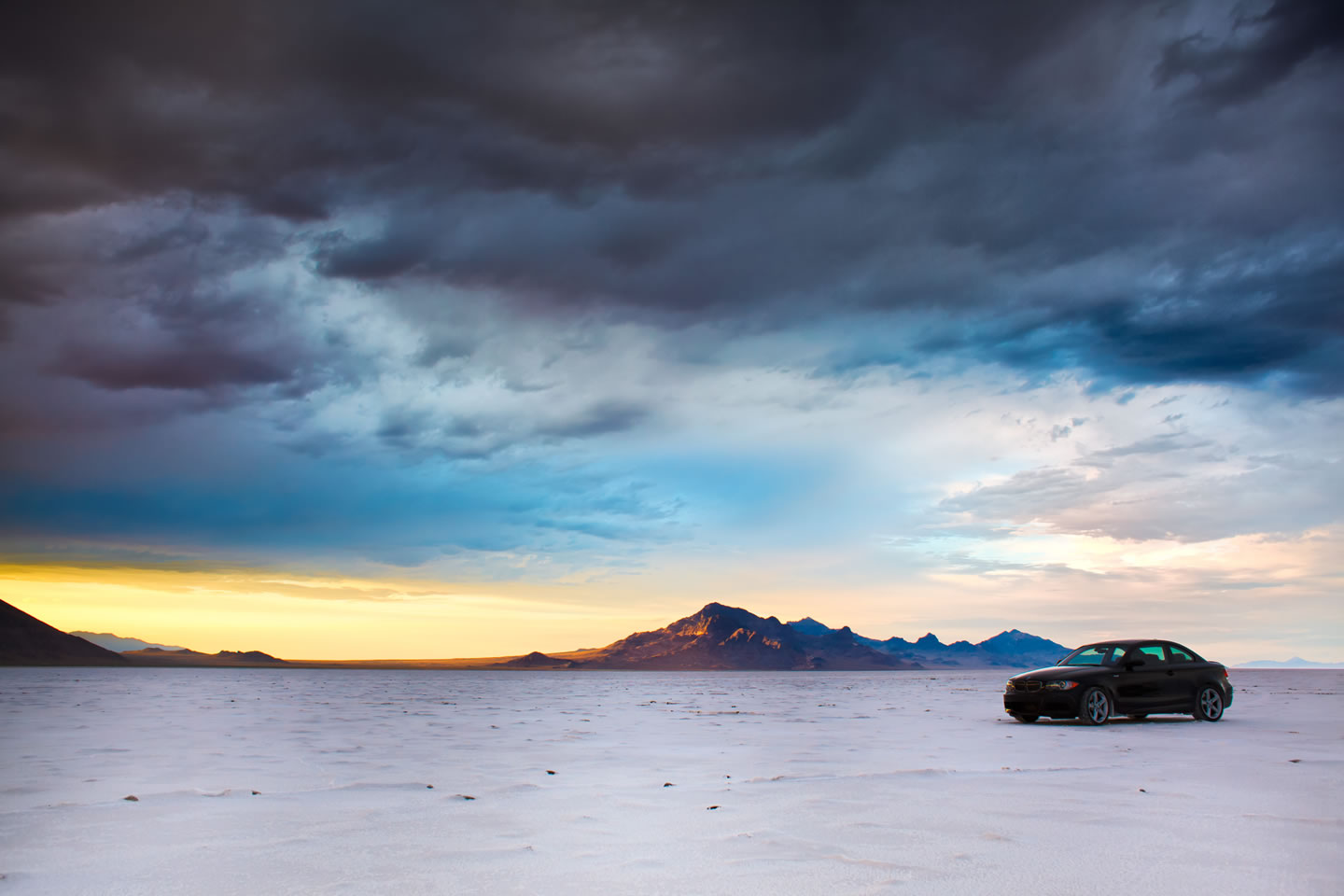 A BMW races across the Bonneville Salt Flats

The salt flats are about 90 miles west of Salt Lake City. They are just west of the Utah/Nevada border. So after a photo shoot you are always able to swing by Wendover for some gambling or enjoy a show. 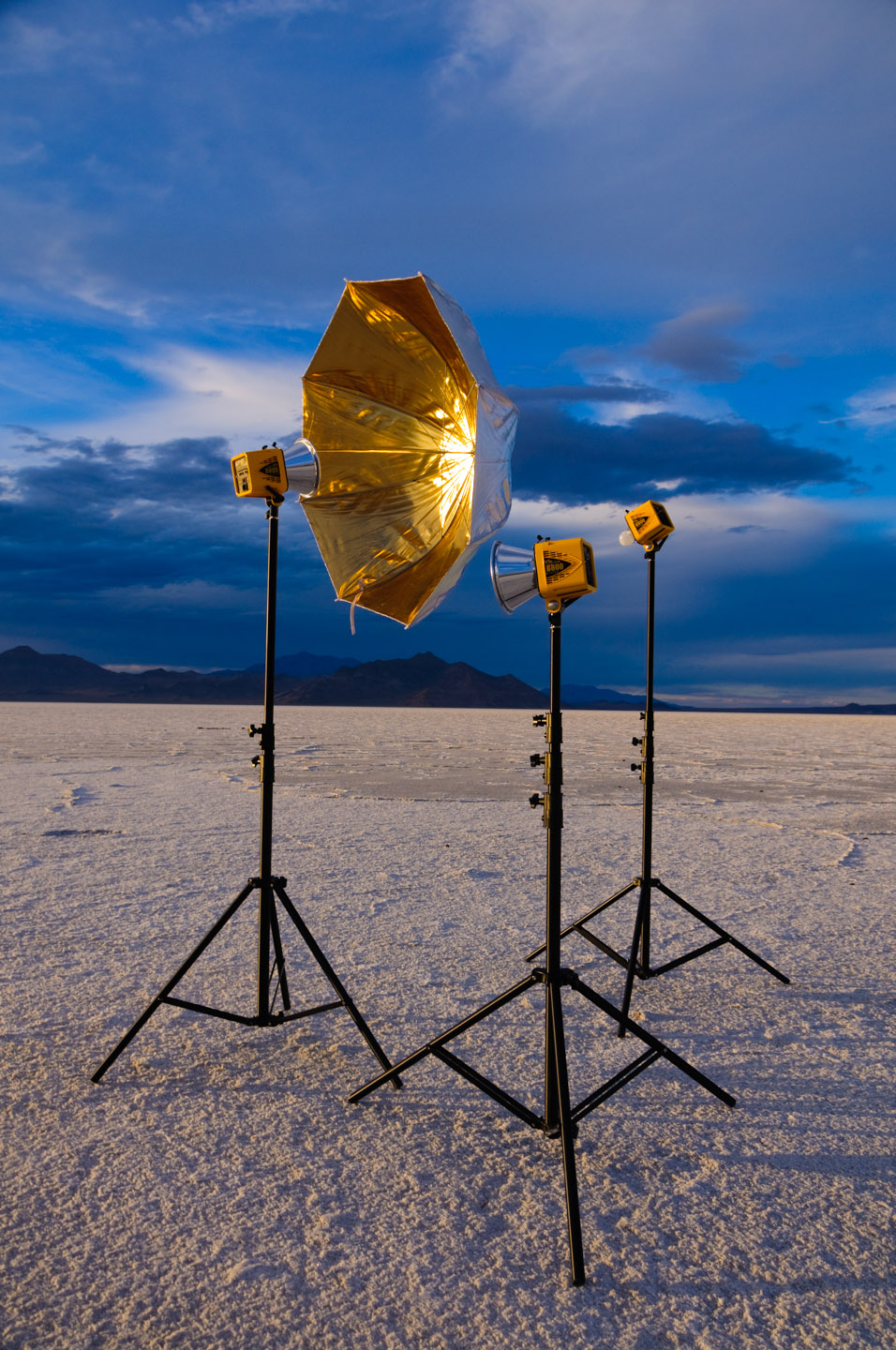 My studio lighting on the Bonneville Salt Flats

I will be traveling out to the salt flats at least once this season. And of course if anyone needs a photo shoot and wants to try the Salt Flats, let me know! 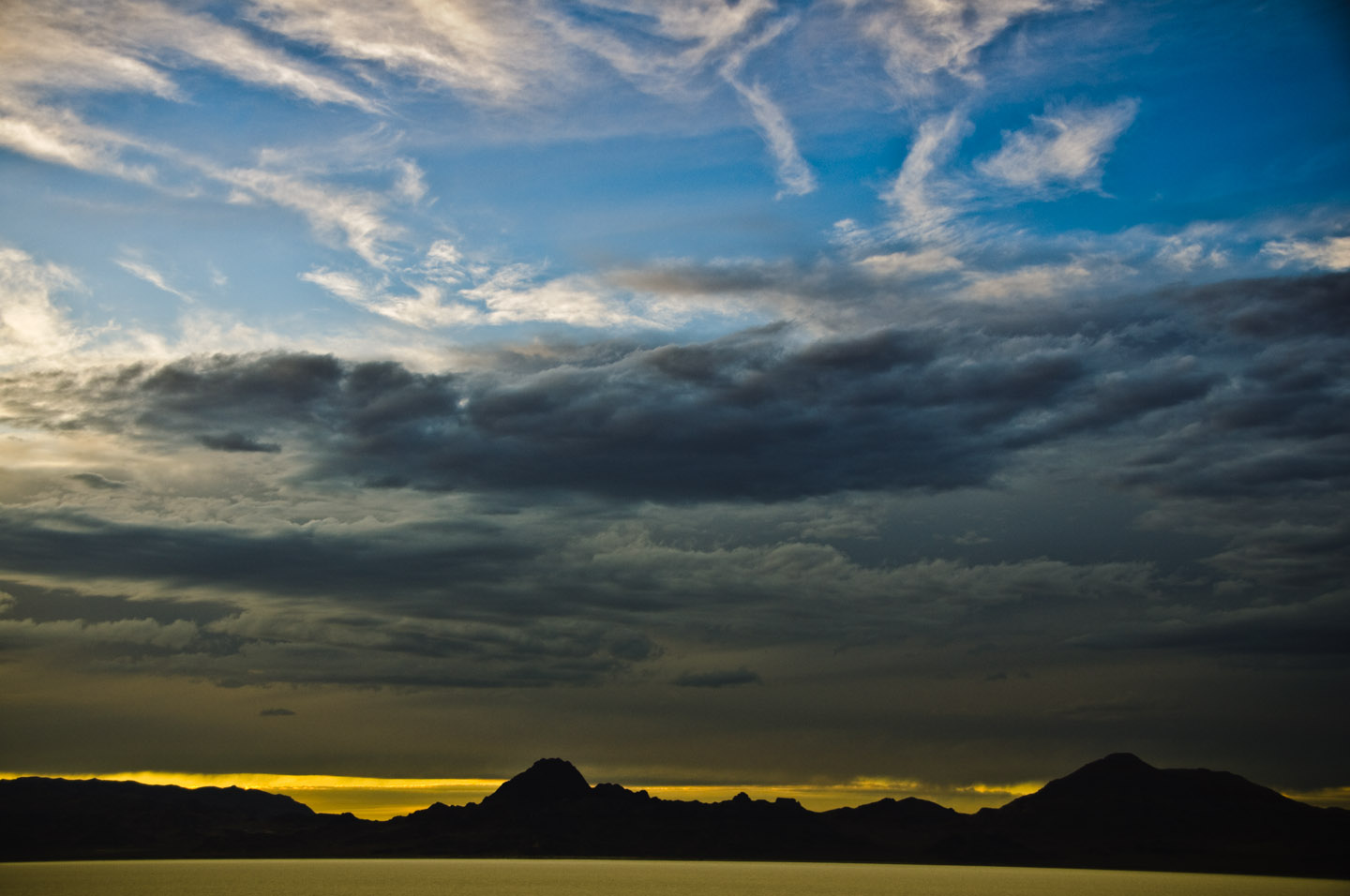 Sunsets on the Bonneville Salt Flats

And during the rest of the year, it is still possible to photograph out on the salt flats. Some amazing photography can be created in the water. The water has a very unique, flat and mirror like quality. But personally, I like everyone to stay dry!

Time is Running Out to See the NEOWISE...

Hello, my name is Mark Young! I saw this article and was interested in the equipment you used for these shoots as I am interested in doing a shoot on the salt flats as well. What lighting products did you use? How did you power your lighting equipment/ what external power source was used if any? Thanks for your time!

Mark, I used Alien Bee lighting gear with a “portable” battery. It’s a lot of big gear to be lugging around.

Hey! Just wondering what time of day you shoot there to get the best lighting?

I prefer to photograph in the afternoons about 2 hours before sunset… it gives us time for daylight photos and then we stay through sunset for a variety of photos as the sunset hopefully explodes to orange, yellows, reds, and more.

[…] Flats, however, the timing was too late in the season and the salt flats were covered in water. The best time for salt flat photography is in July through September and we shot in late […]

We would love some family photos there this fall! What do you charge? There are 8 of us, 2 adults and 6 children ages 6 months – 16 years.

Do you need any special permits to film on the Salt Flats?

I don’t think so, but don’t quote me. I’ve never aight a license for photography and I’ve never had an issue.