Top Posts
Burgers & Sandwiches at The Spoon in 2020
Photos from the Utah HRC Gala 2019 at...
Photographing Glossy Lip Models
How to Shoot Two Different Headshots Quickly and...
Headshots with Nathan in Downtown Salt Lake City
Photos from Force for Good Day 2019
Utah Pride 2019 Photos!
Wedding Photos at Market Street Grill with Tyson...
Sunday in the Park with George by the...
Summer Heritage Gardens Wedding with Sydney & Michael
Home Portrait PhotographyFamily Portraits Who are the Plaintiffs of Kitchen vs. Herbert
Family PortraitsLifestyle PhotographyPhotojournalism

I’ve been photographing LGBT political events, protests, and more for years now. I am sort of the official gay photographer of Utah. And I have been watching and documenting the rise and fall of Amendment 3. So I was thrilled when I was hired to be a lifestyle photographer and photojournalist to tell the story of 2 of the couples behind the court case challenging Amendment 3 in court. 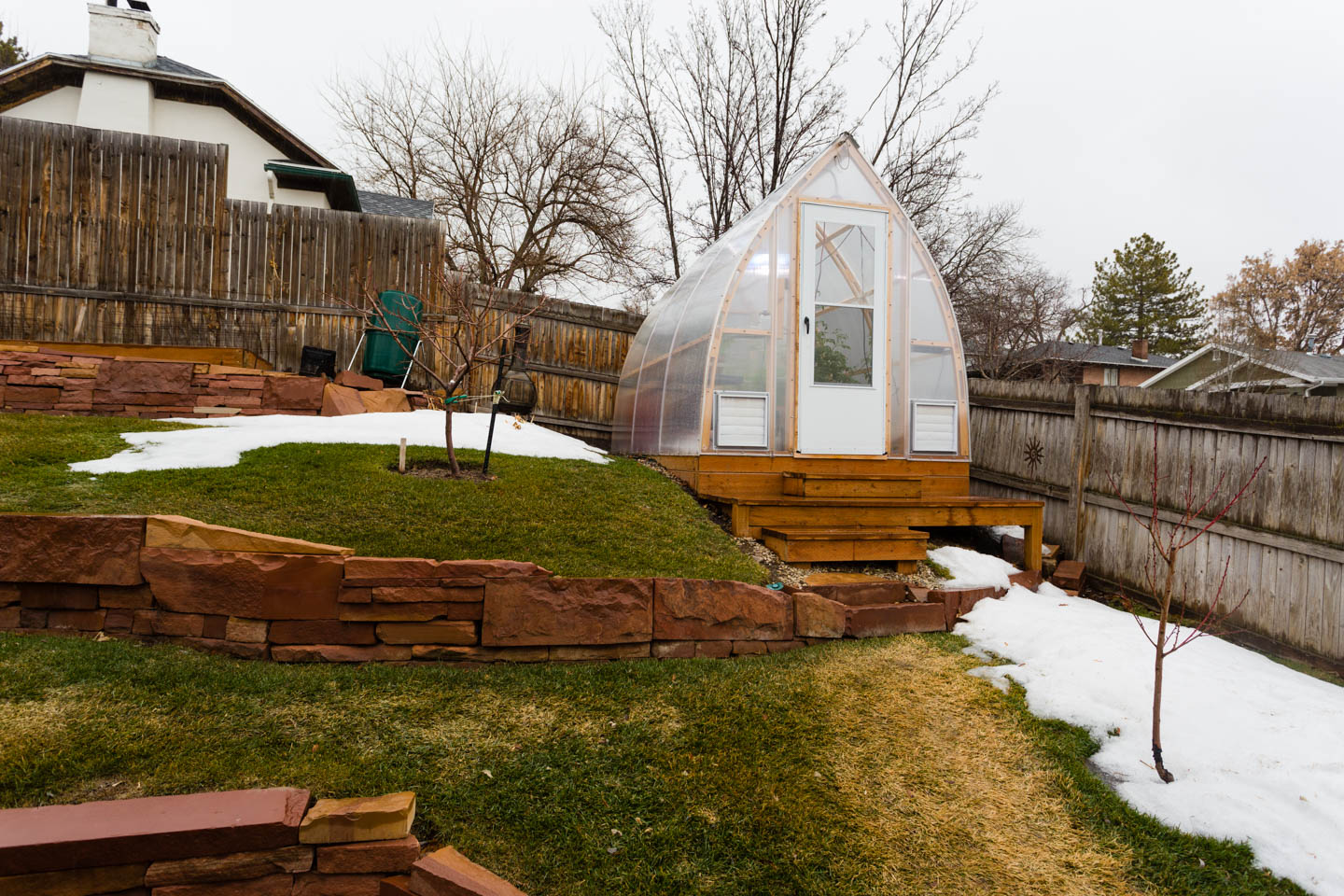 A greenhouse in the backyard

One of the couples is a lesbian couple—we have Kody Partridge and Laurie Wood. They are both educators and they live in Salt Lake City, Utah. They also have a greenhouse they had built in their backyard. That became the key focus when I arrived to photograph them. We started photographing in the greenhouse as they harvested some veggies. 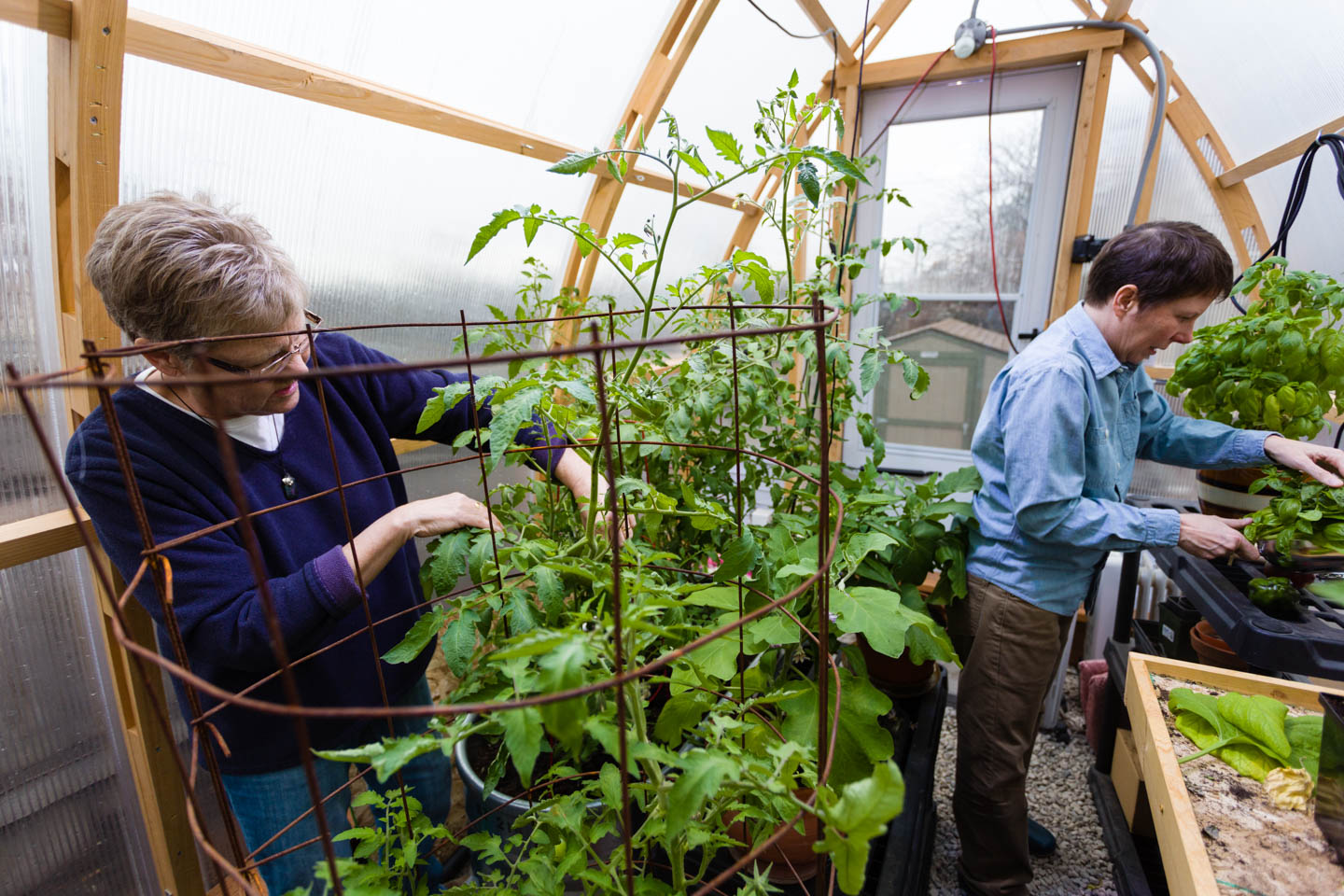 Kody Partridge and Laurie Wood work in their greenhouse 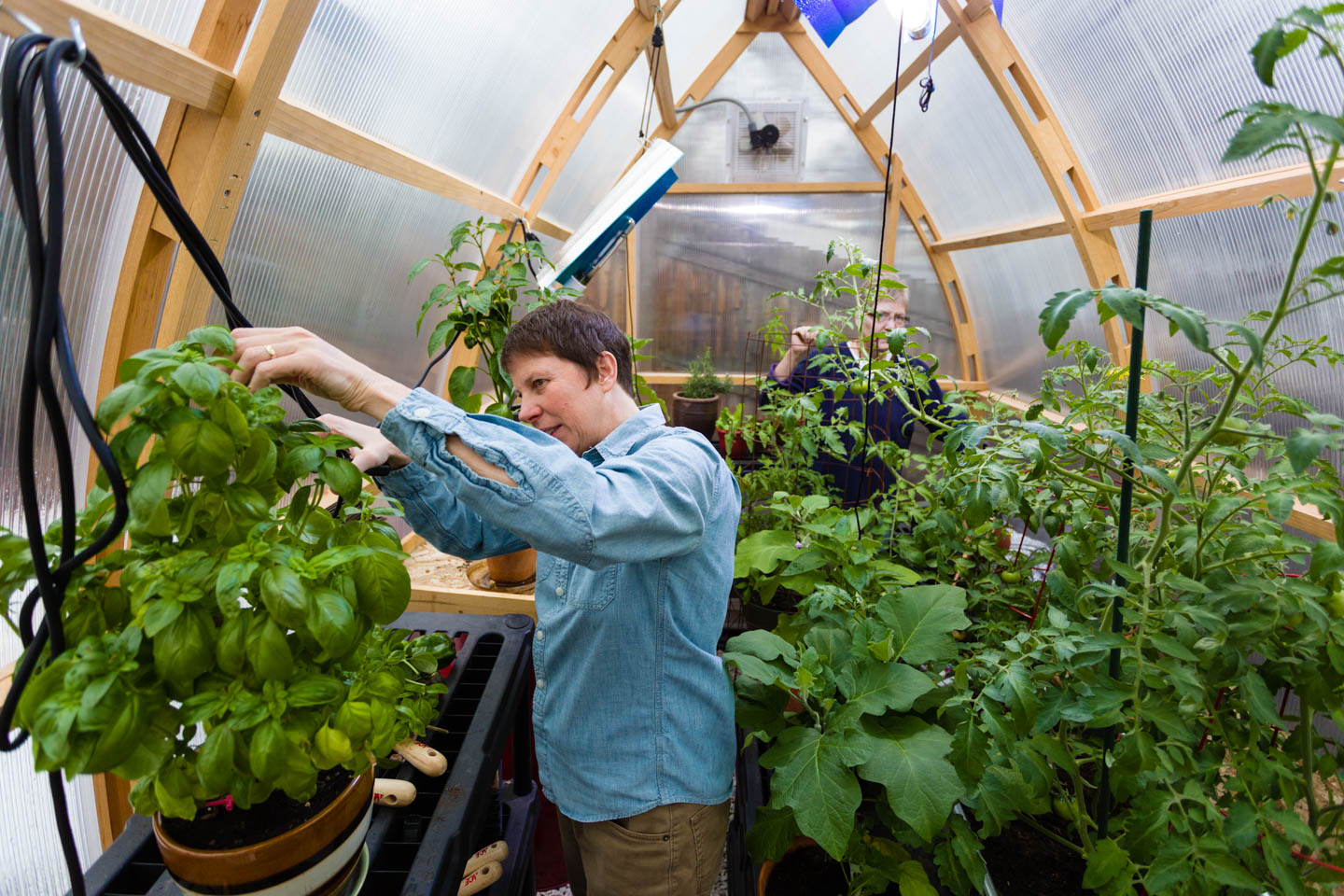 Kody Partridge works in the greenhouse 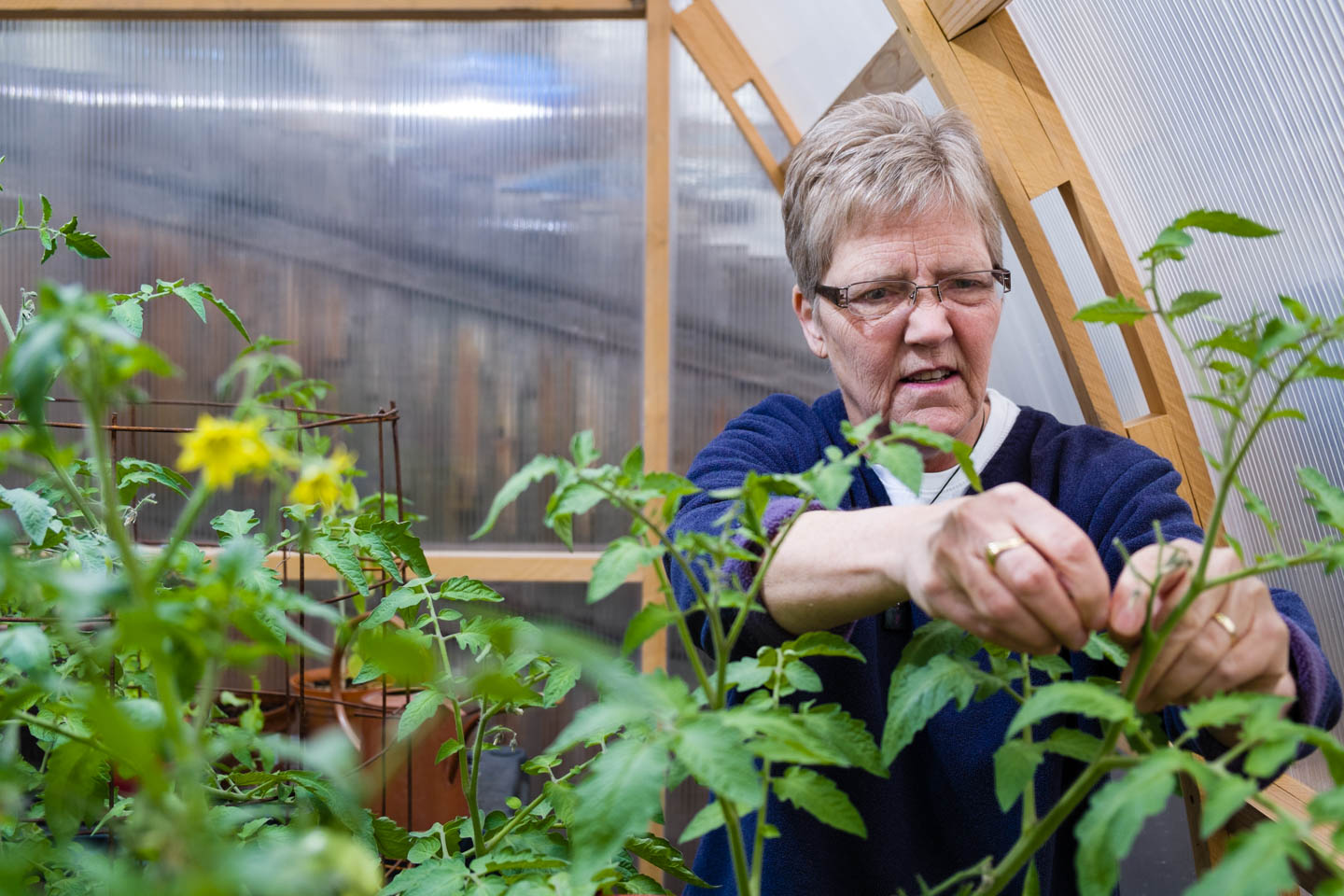 Laurie Wood works in the greenhouse

We then moved inside to photograph them preparing their lunch with fresh greenhouse veggies. We had talked before hand of things they might want to feature in their lifestyle shoot and gardening and cooking seemed like the obvious choice. 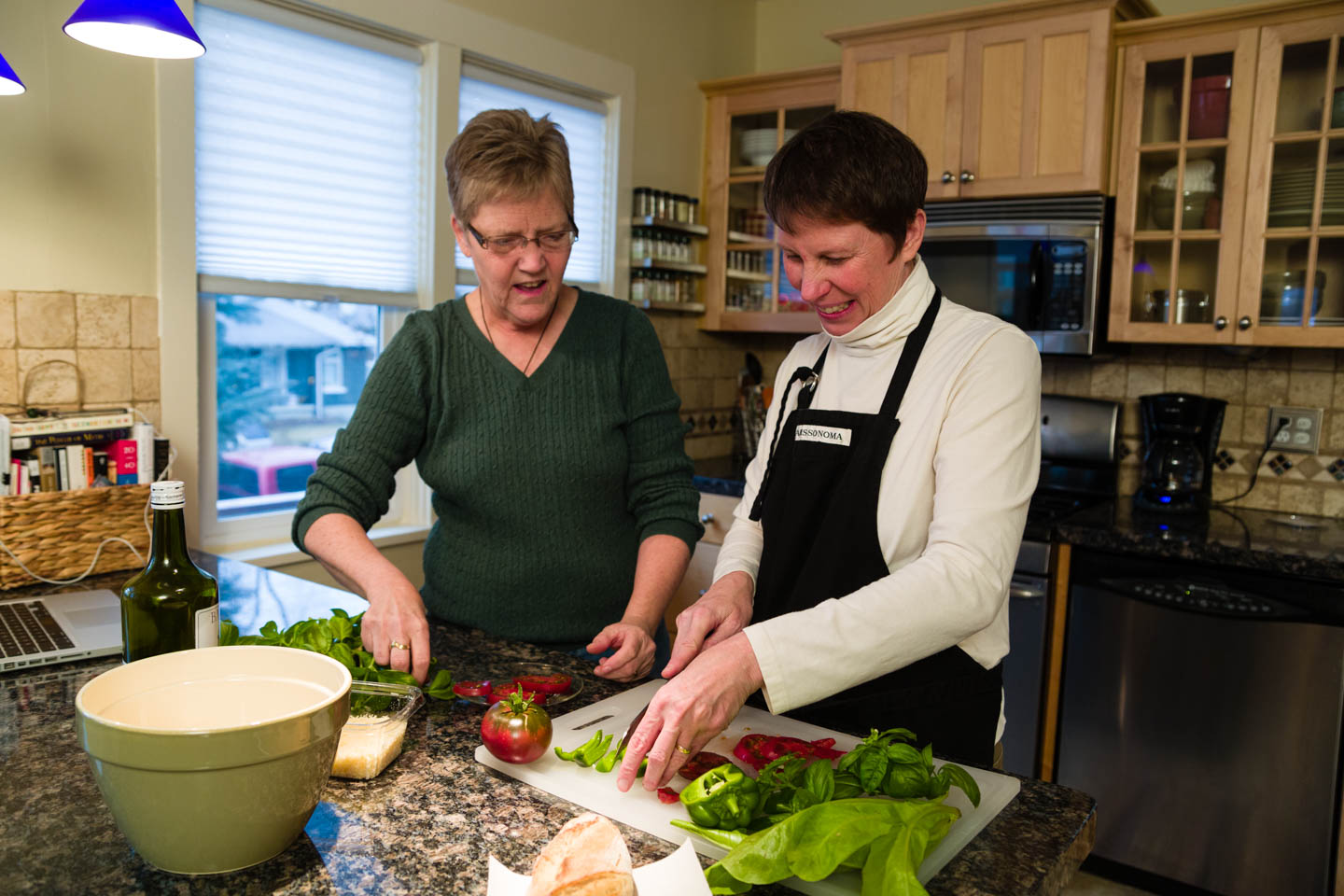 Kody Partridge and Laurie Wood in the kitchen preparing lunch 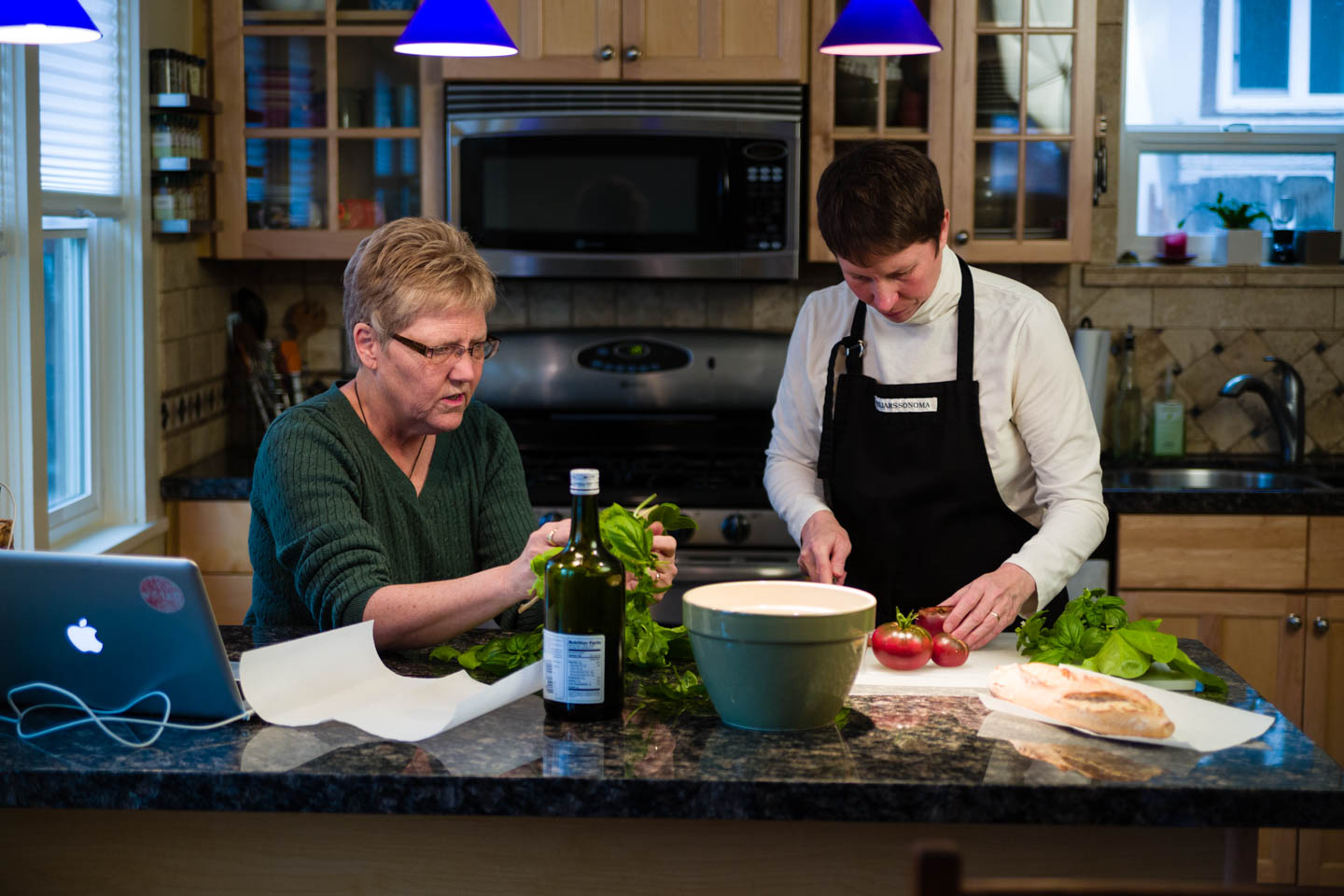 Kody Partridge and Laurie Wood prepare veggies from their greenhouse

We finished the shoot with some more formal portraits in their living room. We did some photos with their dog and some without. 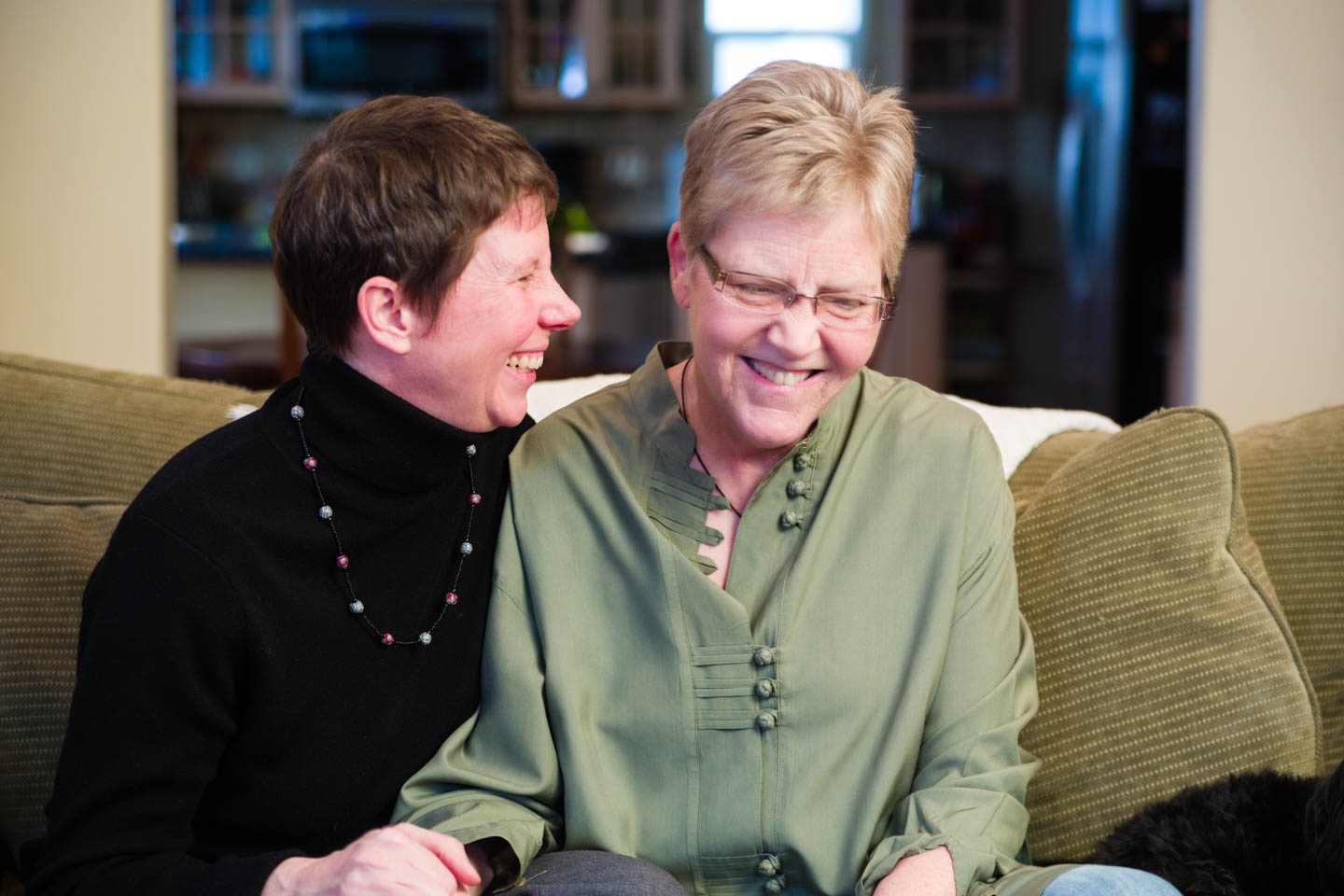 Kody Partridge and Laurie Wood sit for some portraits 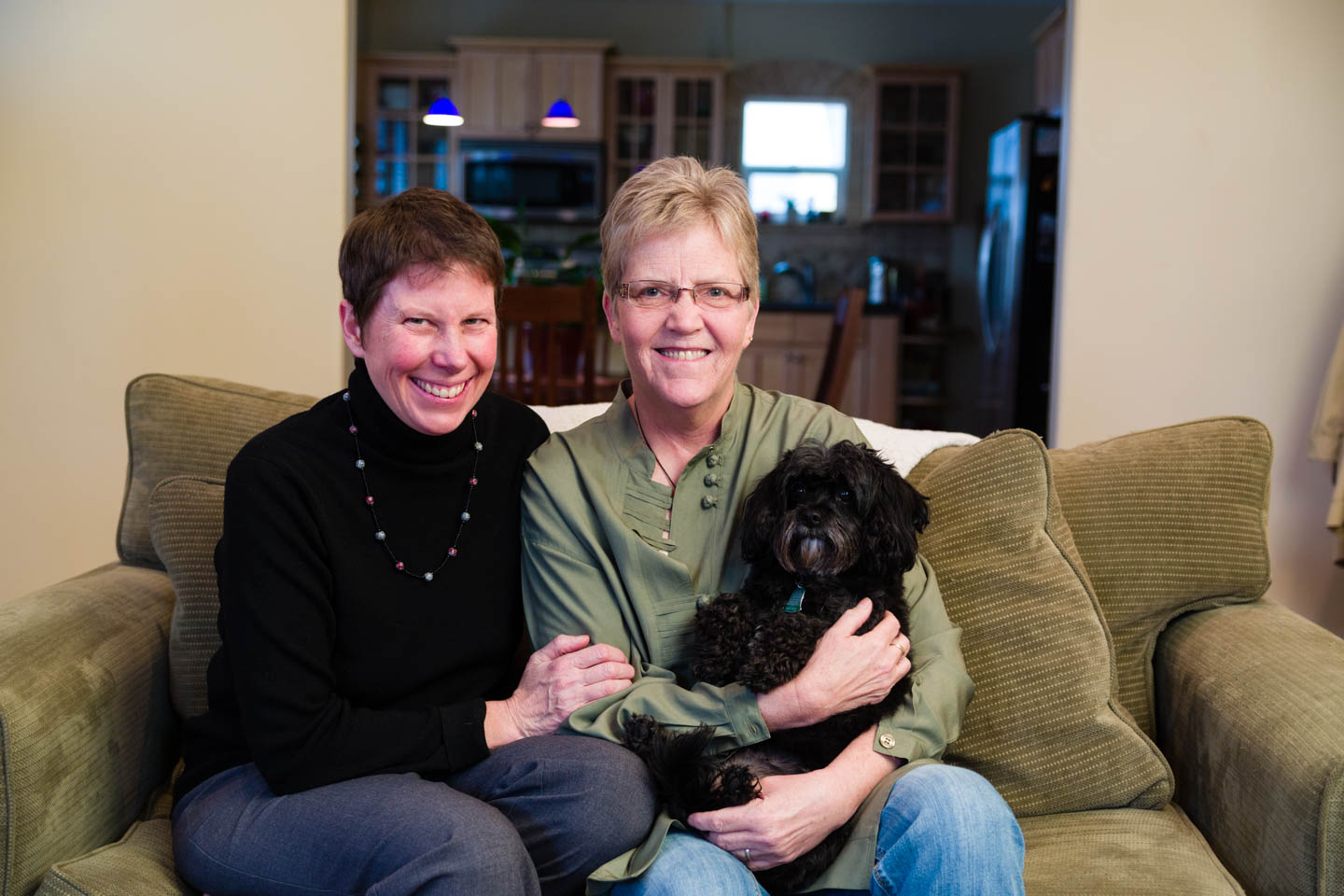 The other couple I photographed was Derek Kitchen and Moudi Sbeity. Moudi is from Lebanon. I’ll confess I love to find people’s backstory and where their families come from and how people meet. They are the owners of Laziz. Because of Sbeity’s background they decided to sell Middle Eastern spreads such as hummus, toum, and muhammara. I’ve ended up buying some of their spreads and the muhammara and hummus are perfect for eating vegetables. 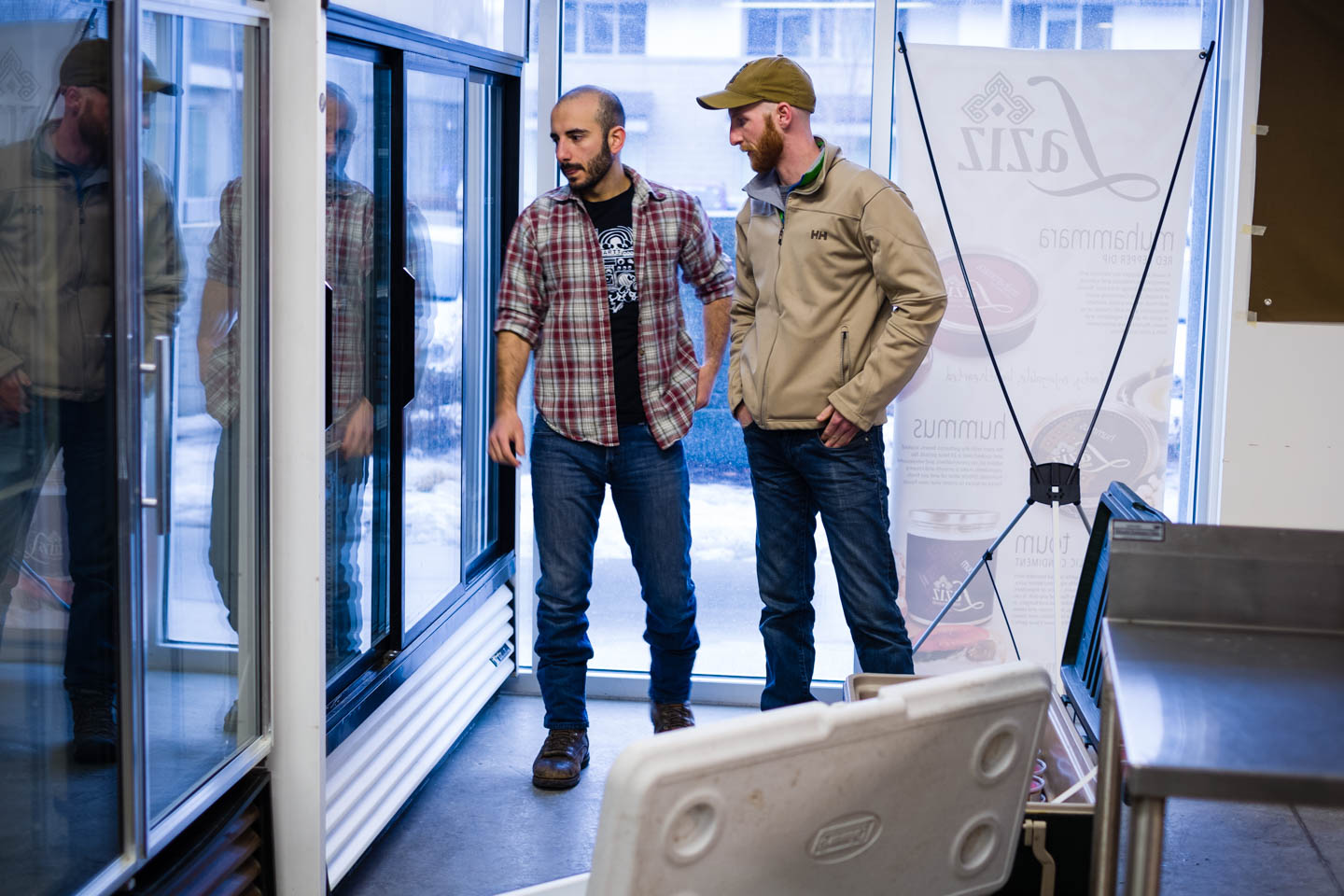 Looking over the Laziz inventory and preparing for the Farmers Market

I met up with the couple at their store front. They live in an artist area where you both rent your apartment and your business front from the same location. That is pretty cool—an easy commute. This morning they were heading to the winter Salt Lake Farmers Market. So I photographed their preparation and then some of their sales and interactions at the farmers market. It is always fun to watch small businesses. Hooray for America! 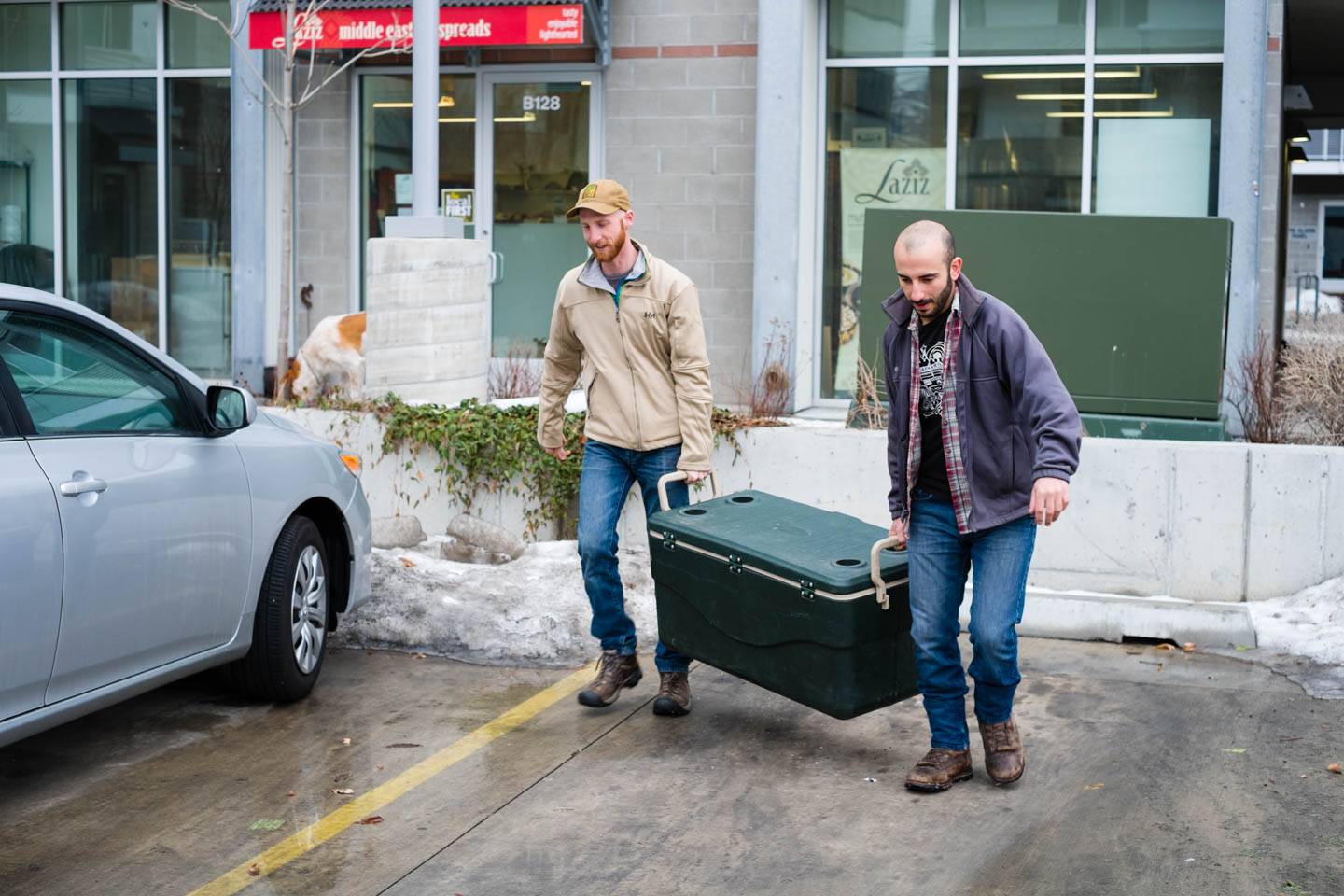 Kitchen and Sbeity carry their Middle Easter spreads to the car. Time for work! 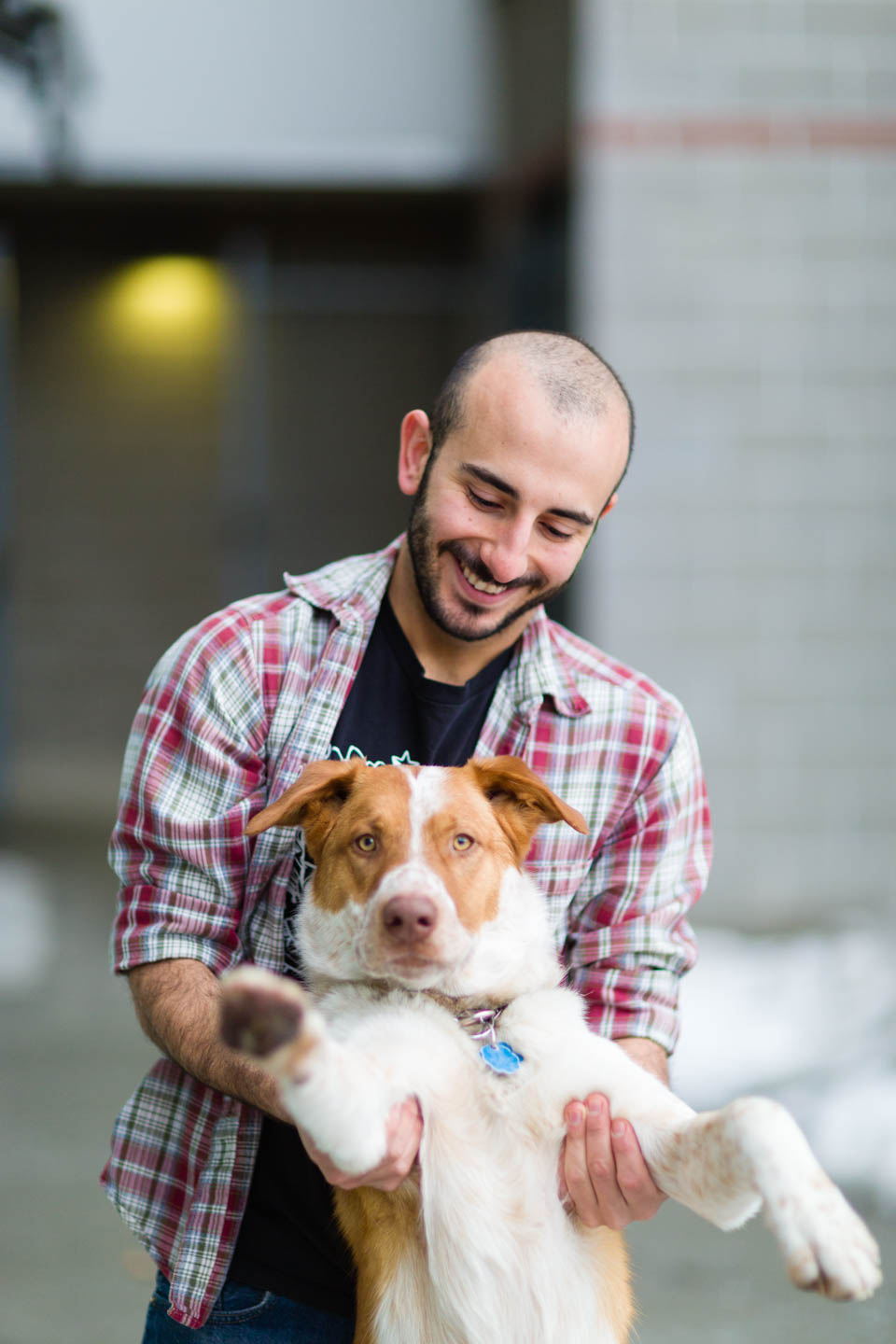 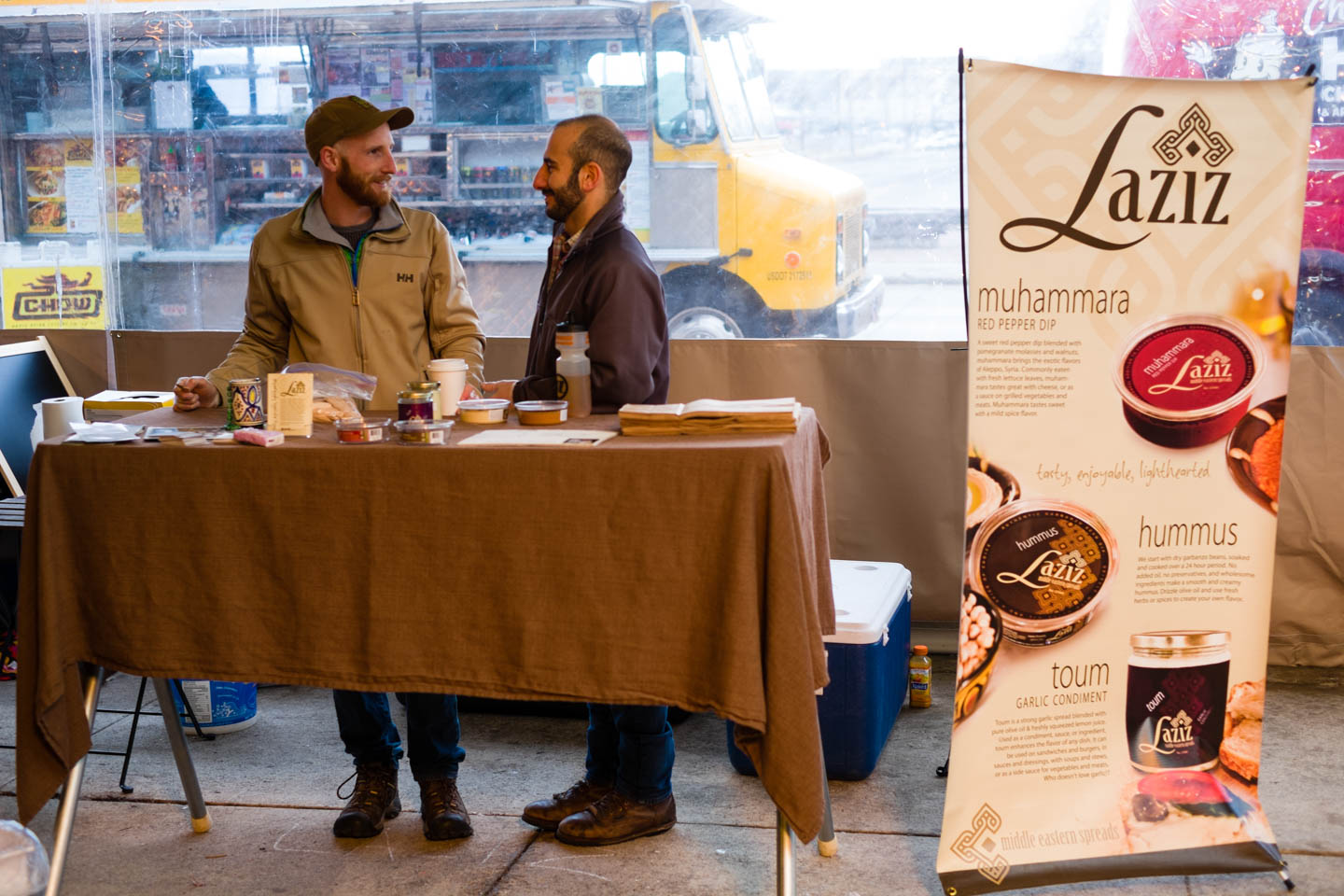 Derek Kitchen and Moudi Sbeity are the owners of Laziz 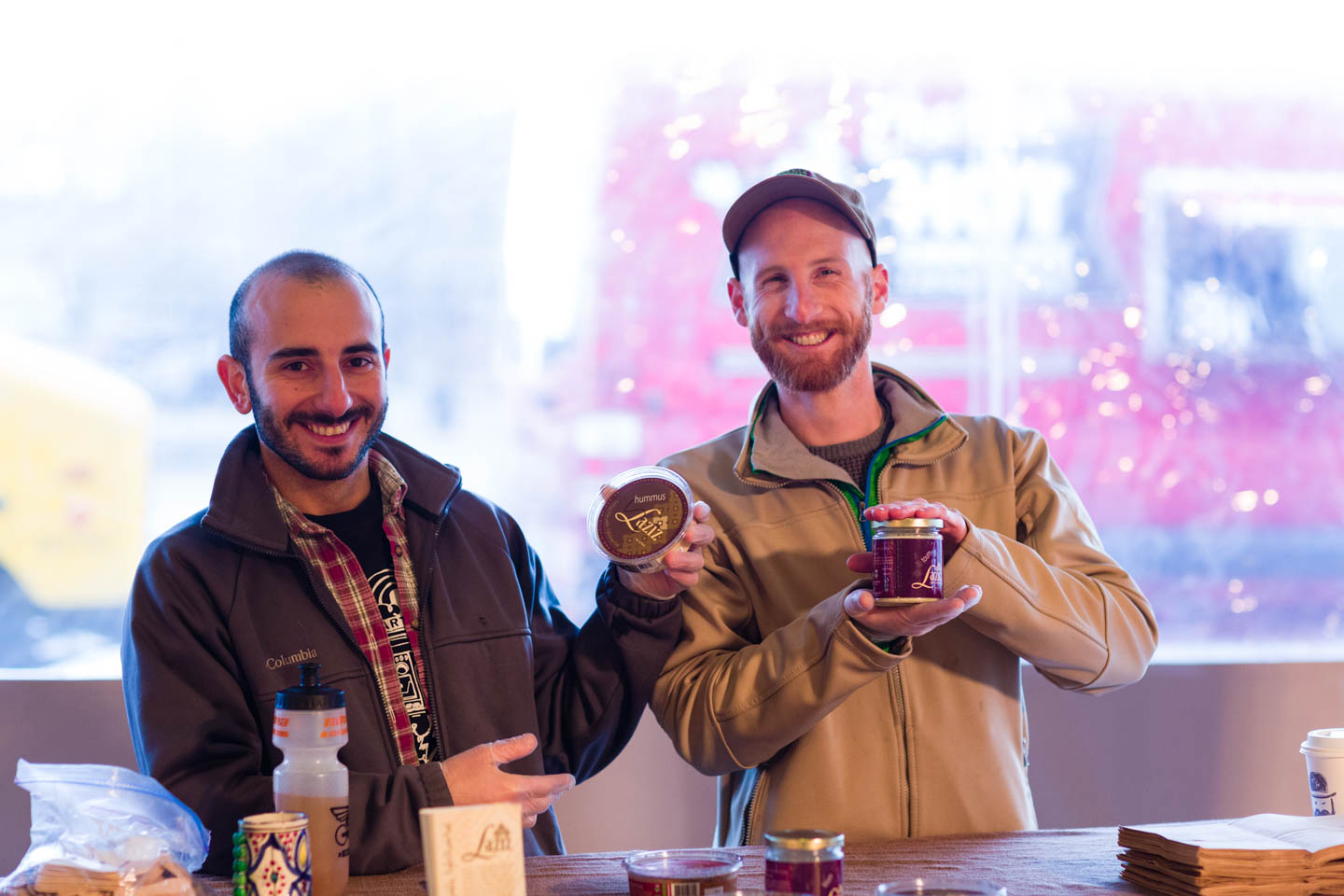 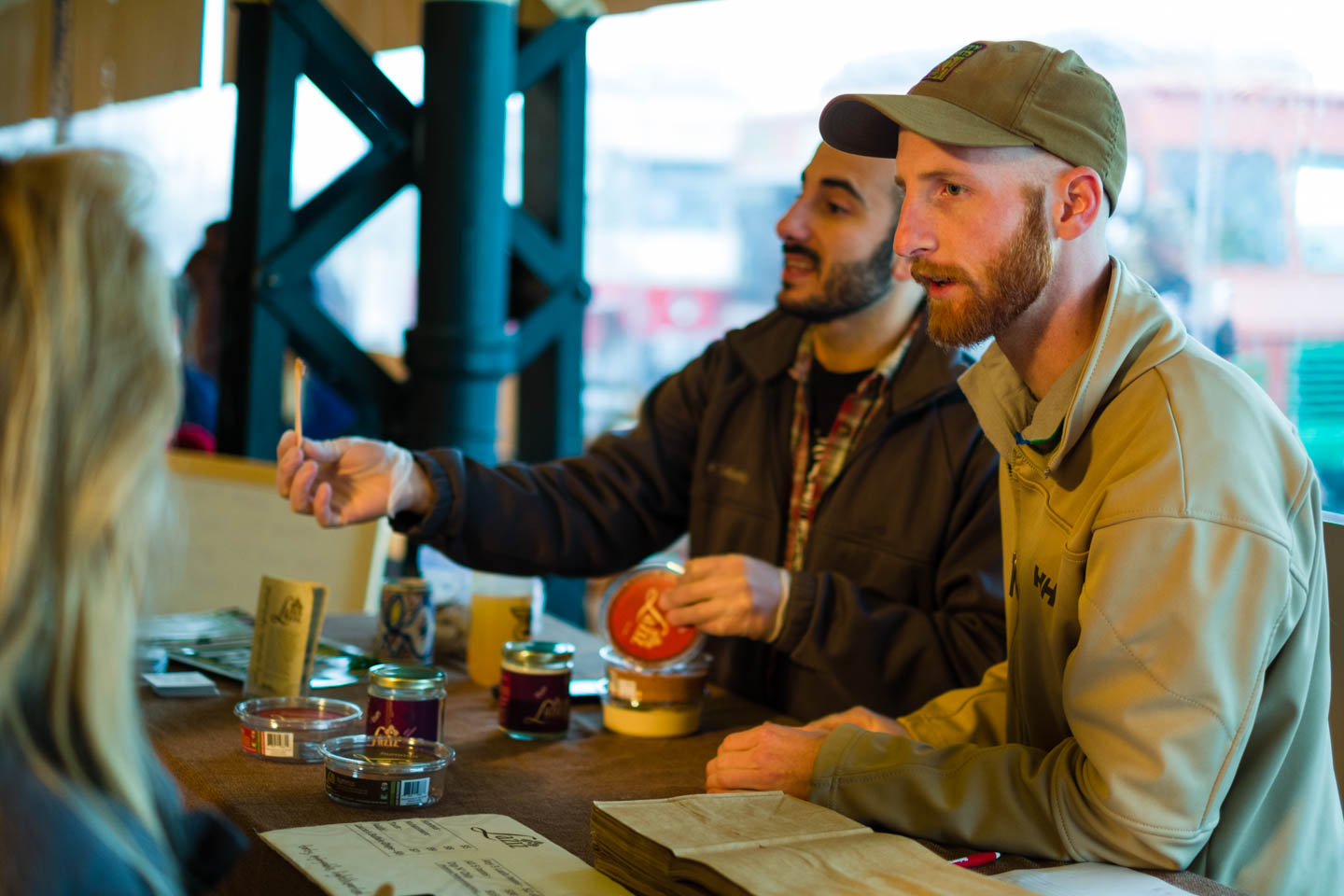 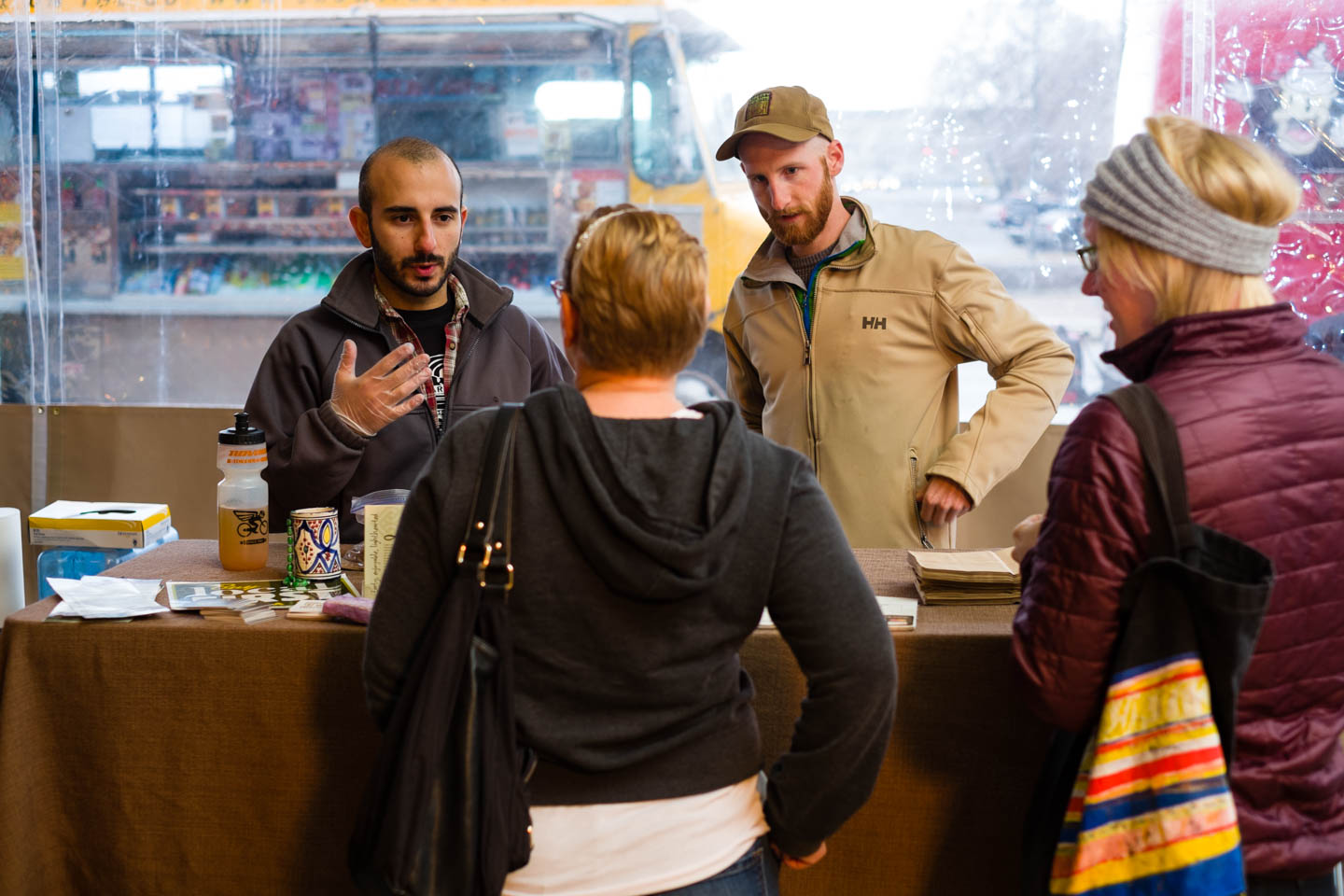 Laziz is an up and coming company in Utah. They sell Middle Eastern spreads such as hummus, muhammara, and toum

We met up the next day to photograph them at home. They were preparing a Middle Eastern soup that I was able to sample and it was delicious. Turns out all the lifestyle portraits ended up with both couples cooking in the kitchen.

A portrait of Kitchen and Sbeity overlooking Salt Lake City 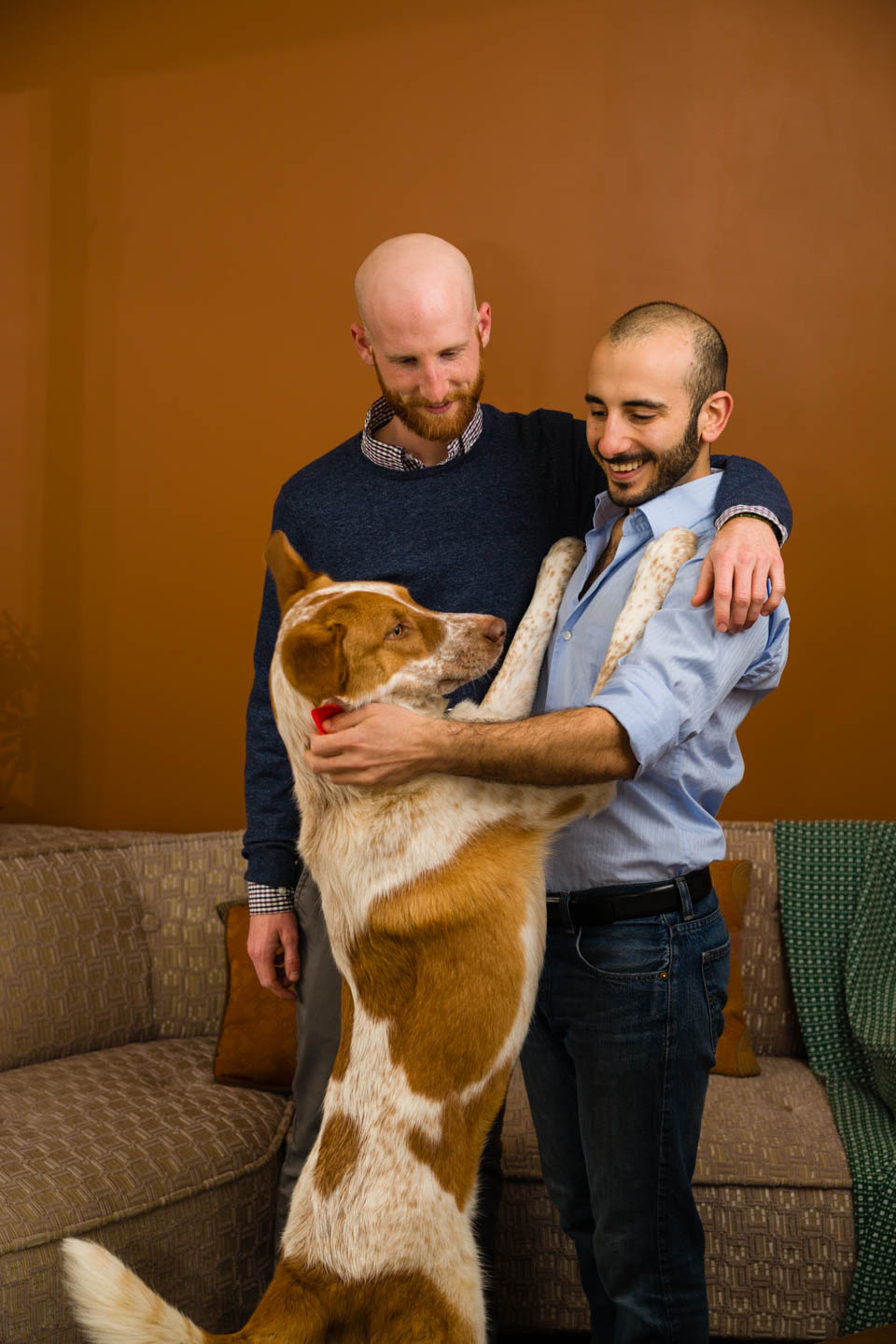 Goji their dog wants to play 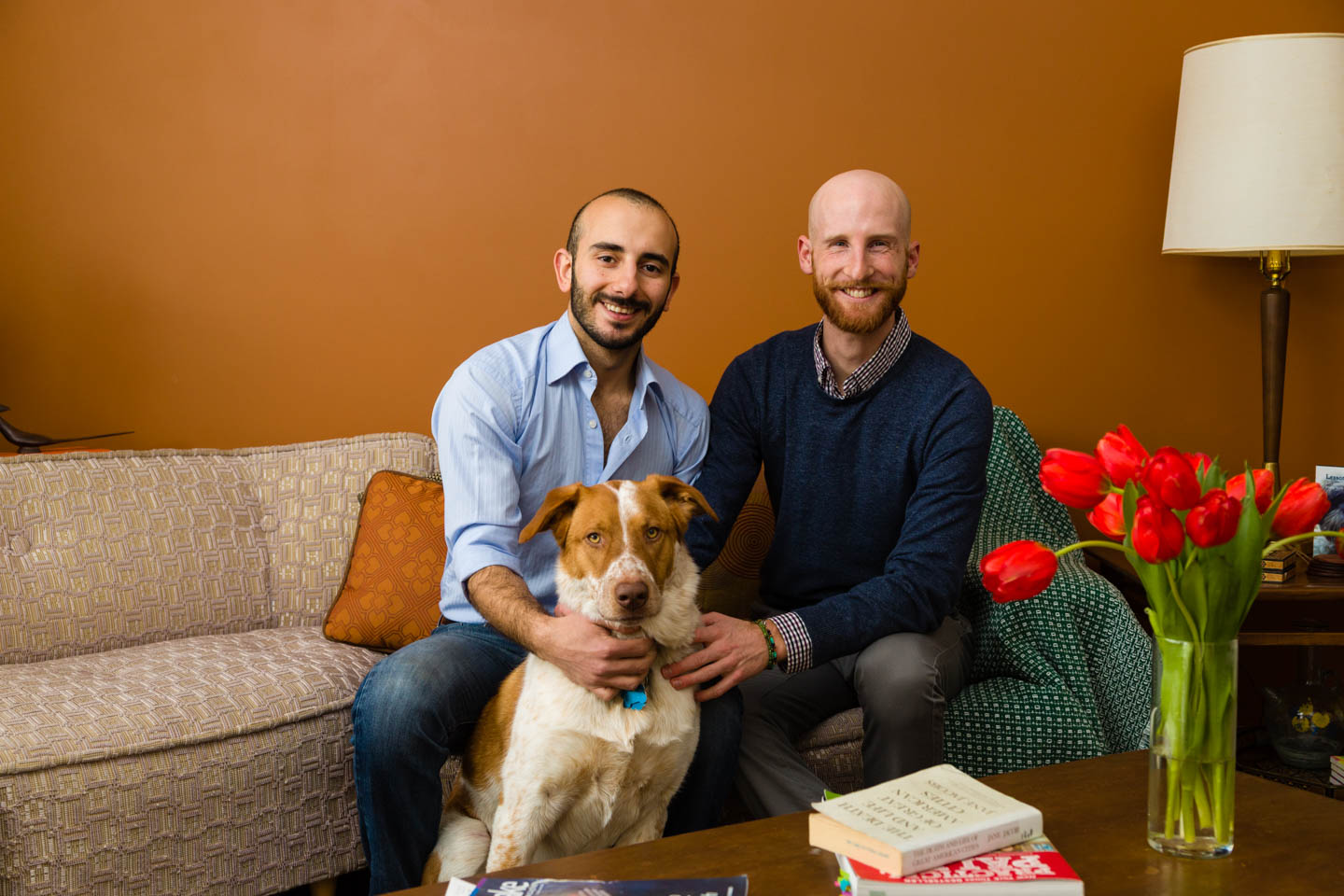 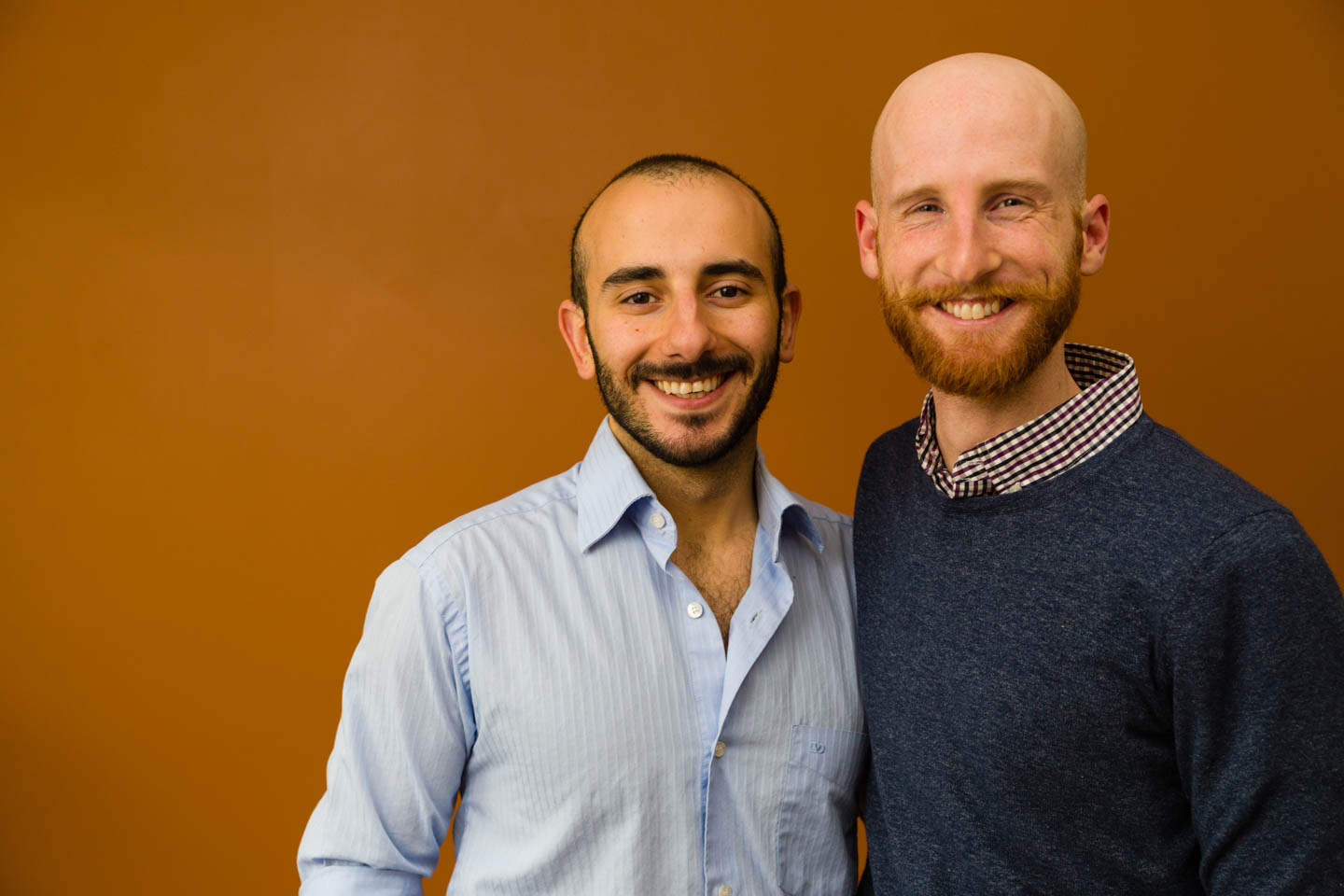 Derek Kitchen and Moudi Sbeity portraits at their home in SLC 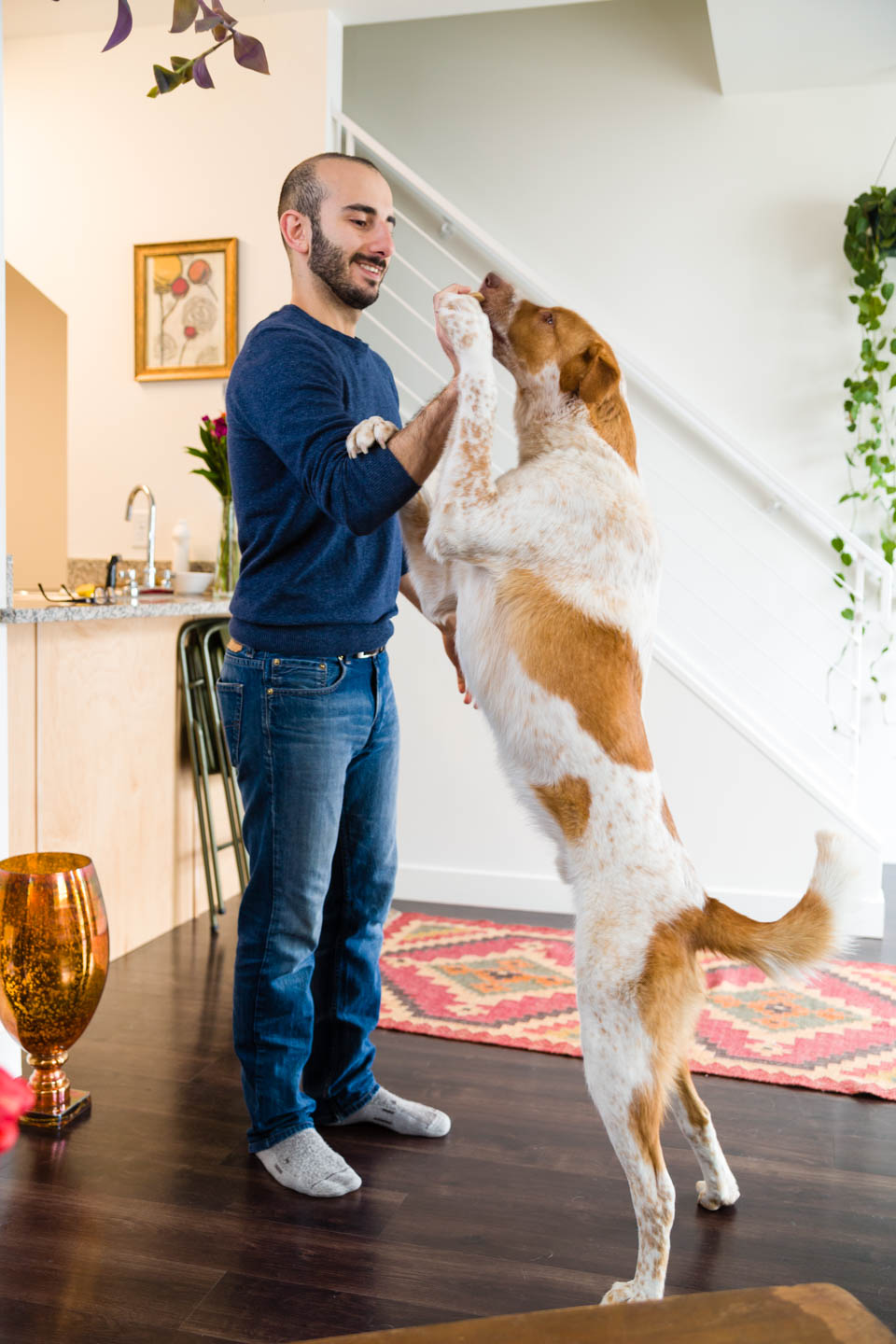 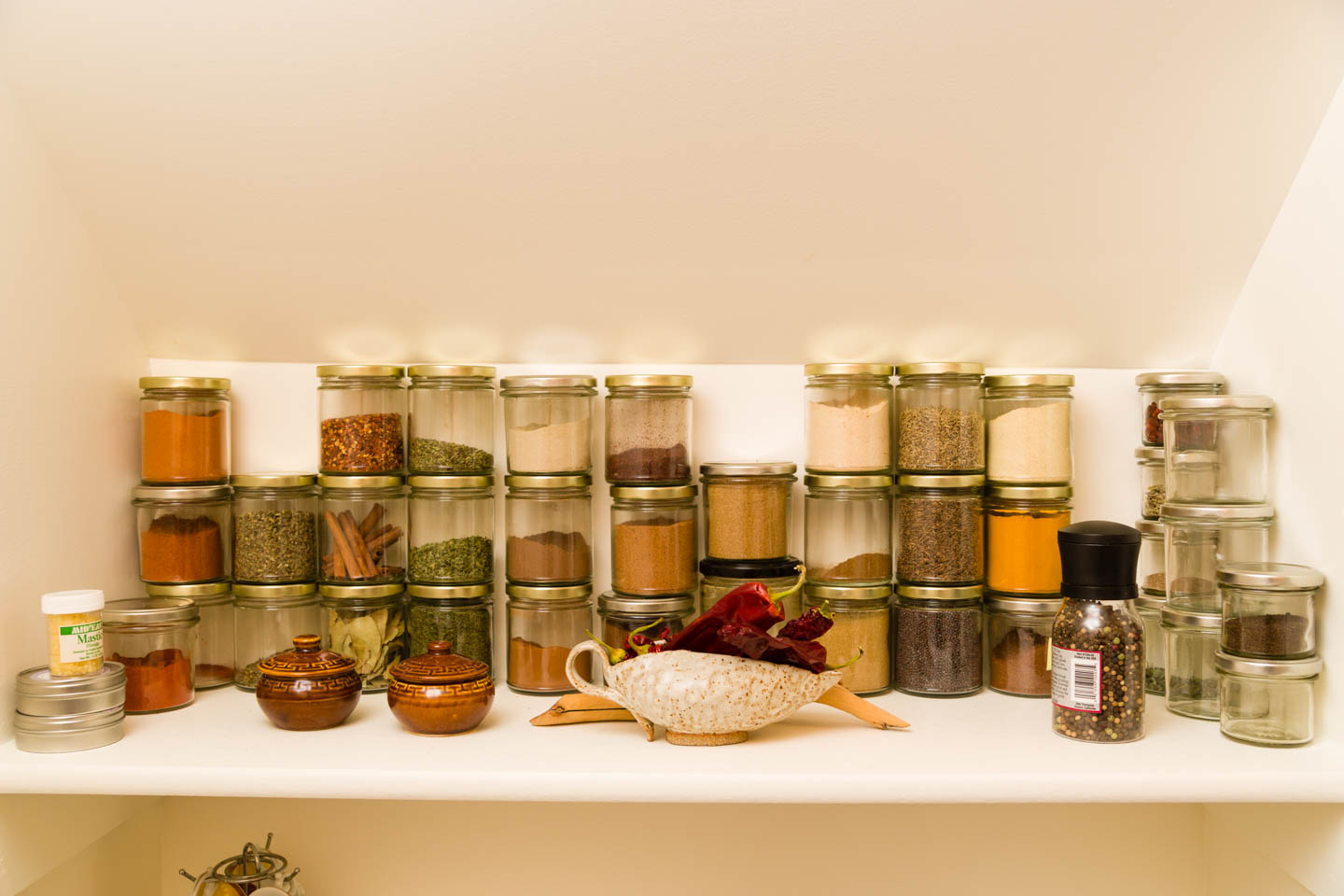 Spice rack at the home kitchen 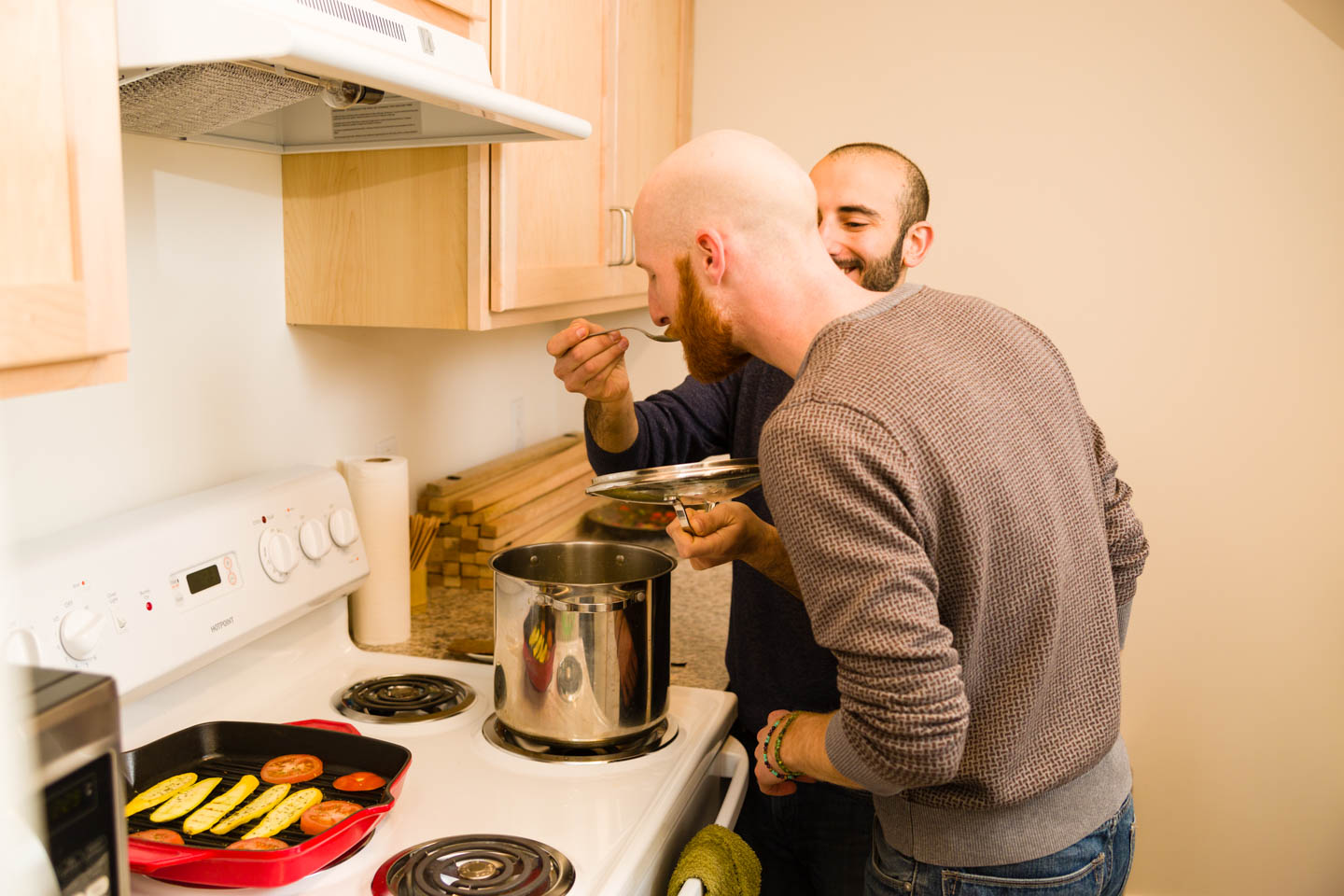 The couple that cooks together stays together 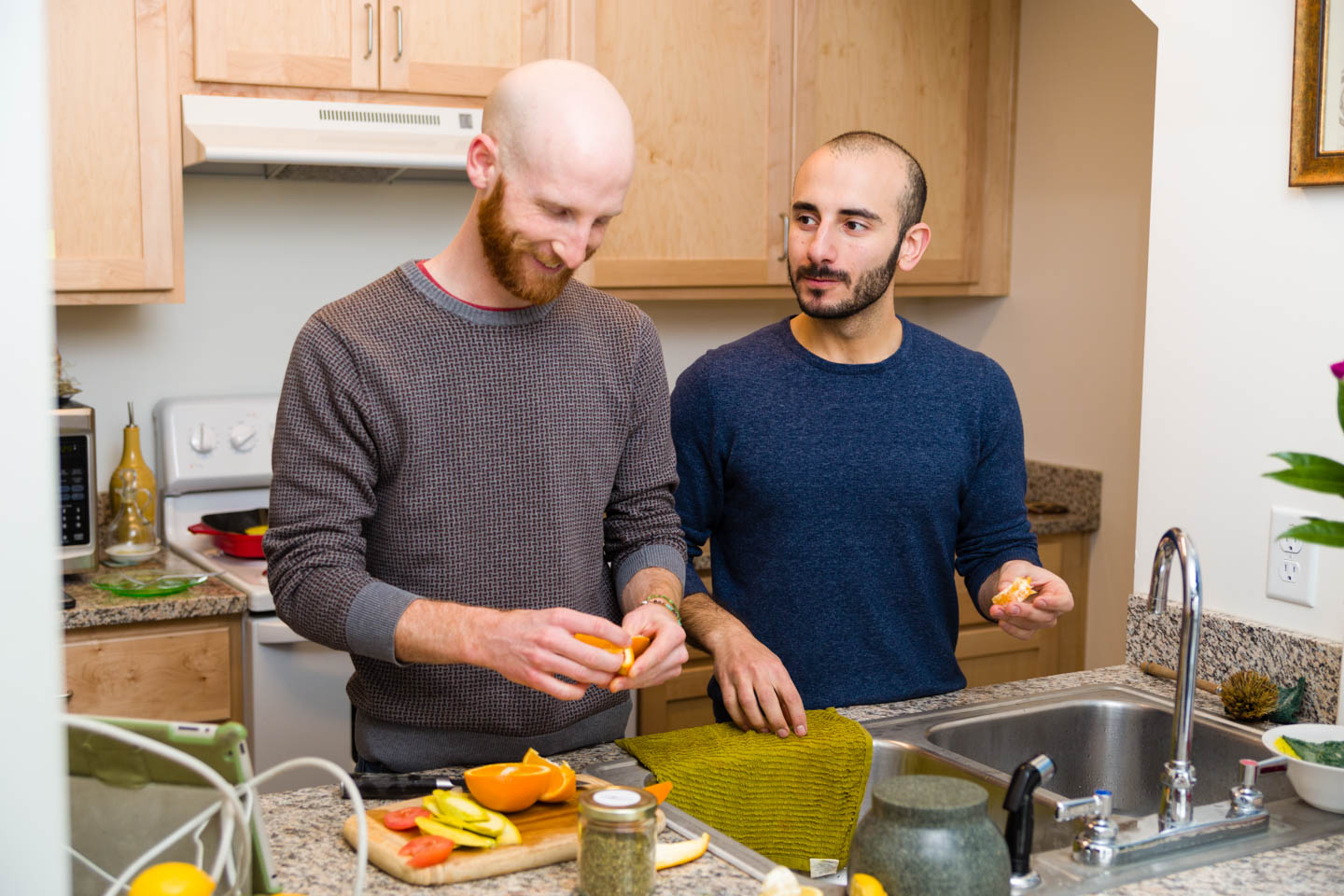 I had a blast photographing the two families and will be following the court case with much interest. And I also want to express my condolences. Since I photographed Derek and Moudi their dog Goji passed away. It is always heartbreaking to lose a pet. He was part of their family, a friend, and a great dog.

Photographing Employees for a Careers Page