It’s been a little while since I posted a batch of my Photoshop Composites. Back in 2009 I decided to create 300 Photoshop Composites to practice and learn how to improve my skills. Some of the photos have been awful and others have been pretty good. These are a few of the favorites. I have created about 280 photos so far… so I am close to completing the goal and in only 6 years? I need to work harder.

The following photograph was created with a Westcott model at Photoshop World 2009. They had some amazing makeup artists and stylists for these shoots. The goal was to sell the Westcott lighting system. I photographed the background in the Muirwoods and it seemed like a logical place to put the model 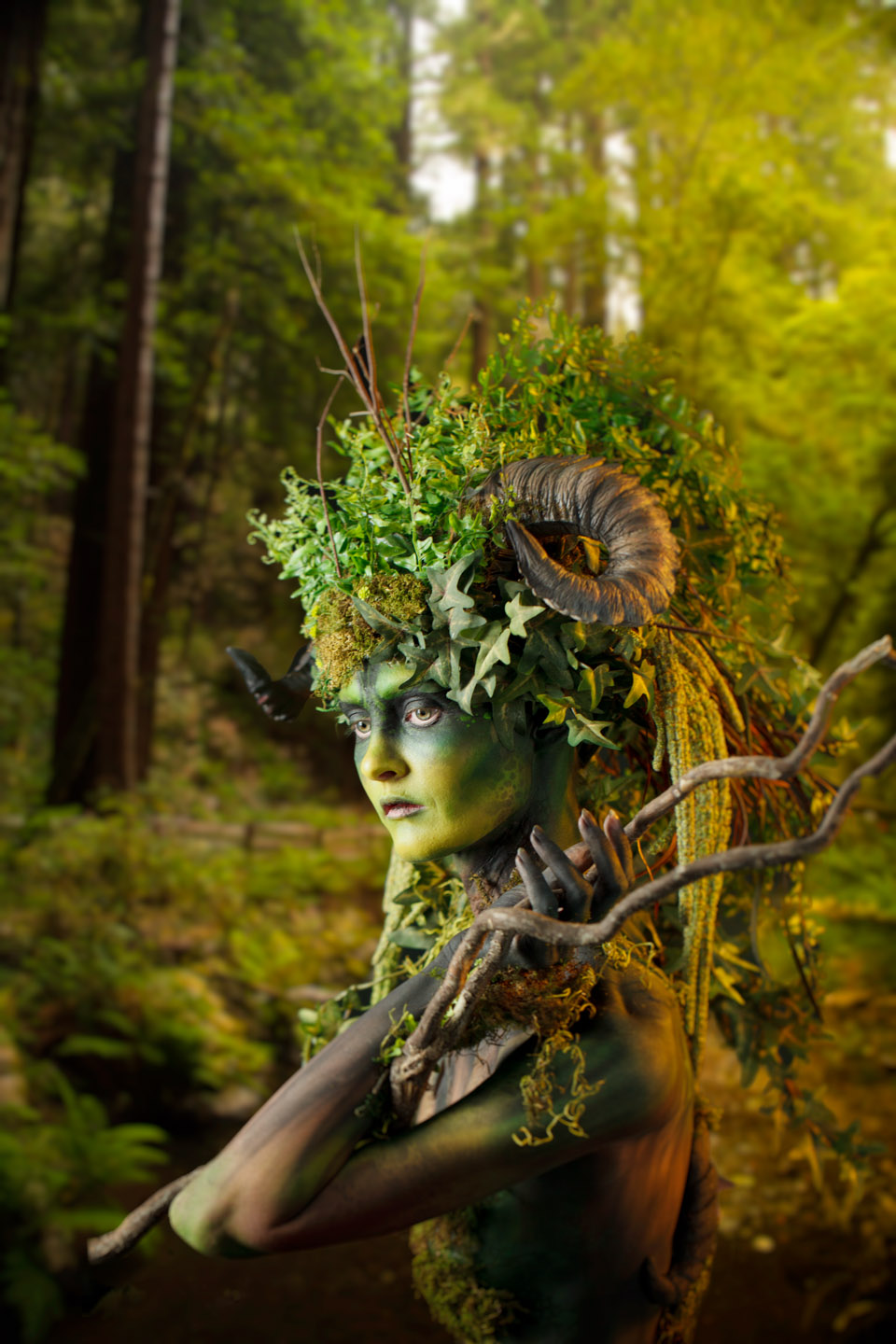 Model from Photoshop World added to forest scene in Photoshop

People love to point out the Hollywood movies that look fake. When CGI is awful people tend to notice. However, people tend to notice CGI effects when the story and movie’s plot are lacking or substandard. If there is a great story, people are willing to overlook mistakes or poor CGI. I think this works with photography. If I can develop a great concept then the photograph works better and people will tend to overlook Photoshop that might look over the top. I want to create a photo realistic image when I am done. It takes some serious work and dedication. I’m not perfect but I have gotten better. And I try not to through a cheap Instagram filter over the photo to hide my work. 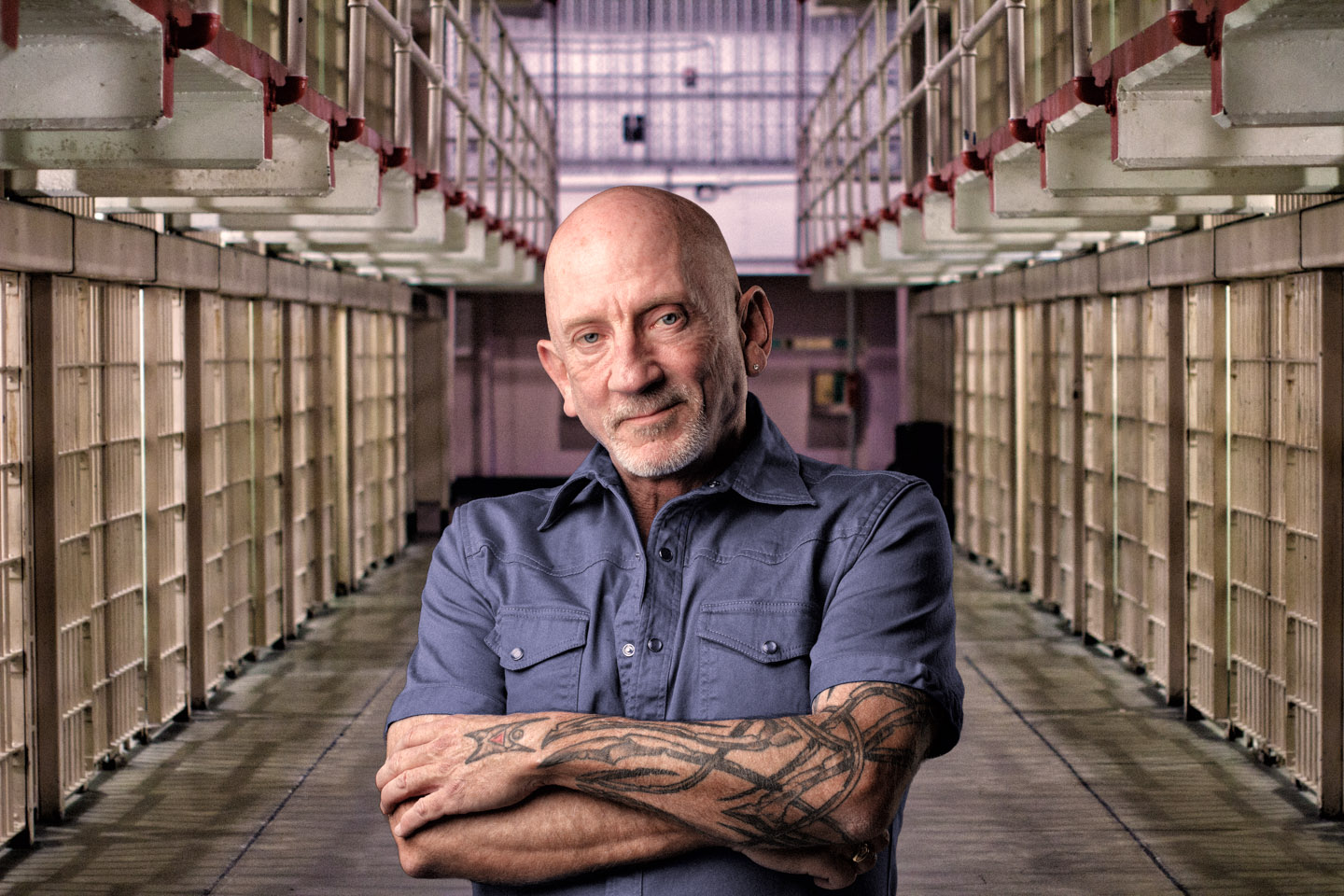 The most simple is just placing a headshot over a nice background. These are similar to portraits I would create in the “real world” anyway so it isn’t so much of a stretch to fool the world with Photoshop. 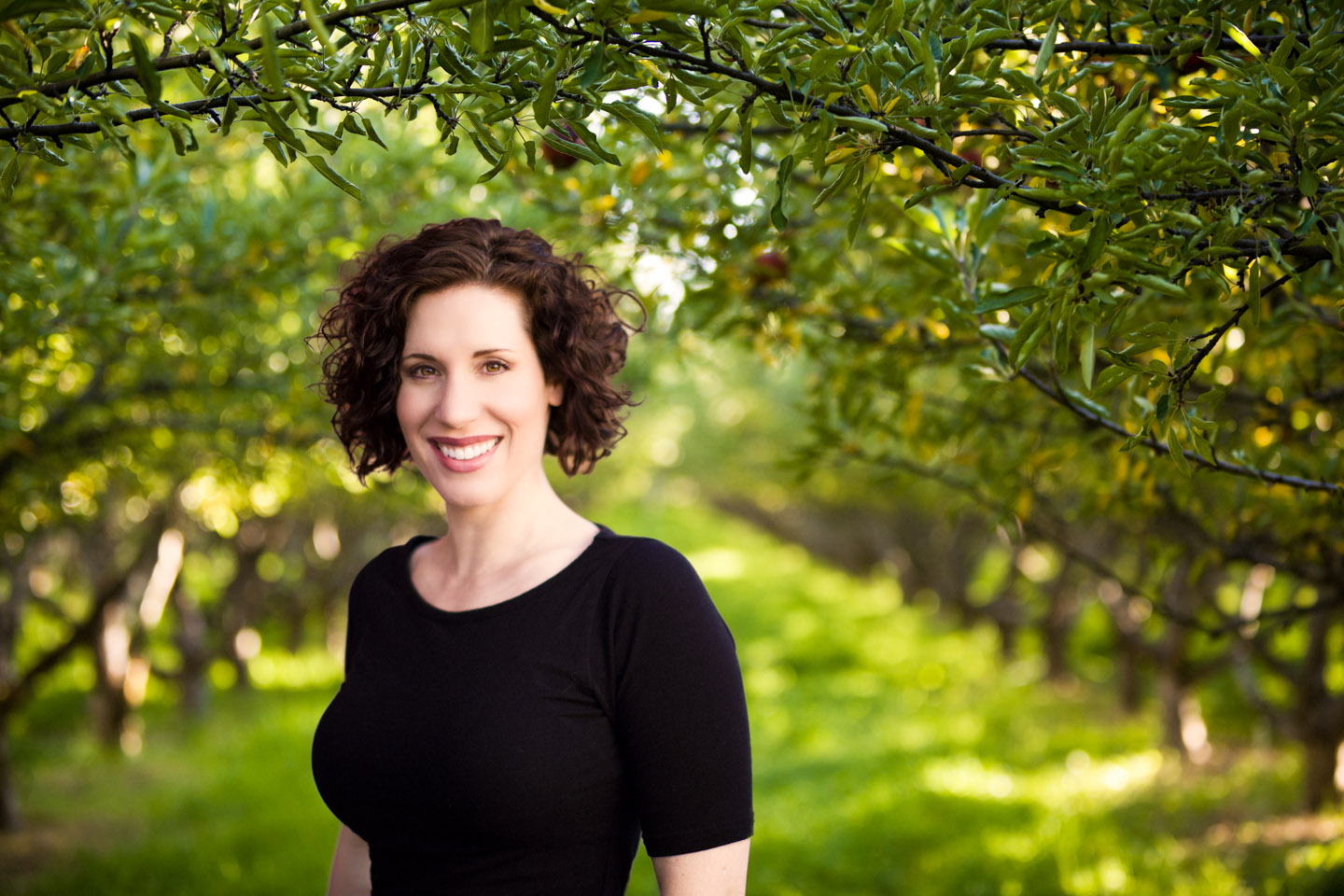 Brenda added to an orchard portrait

Other times I am working with different subjects and I need to decide what works together. It might not make sense to put Mad Max in a modern shopping mall. You put him in a wilderness scene. When a model is dressed like a waiter you can put them in a winery. 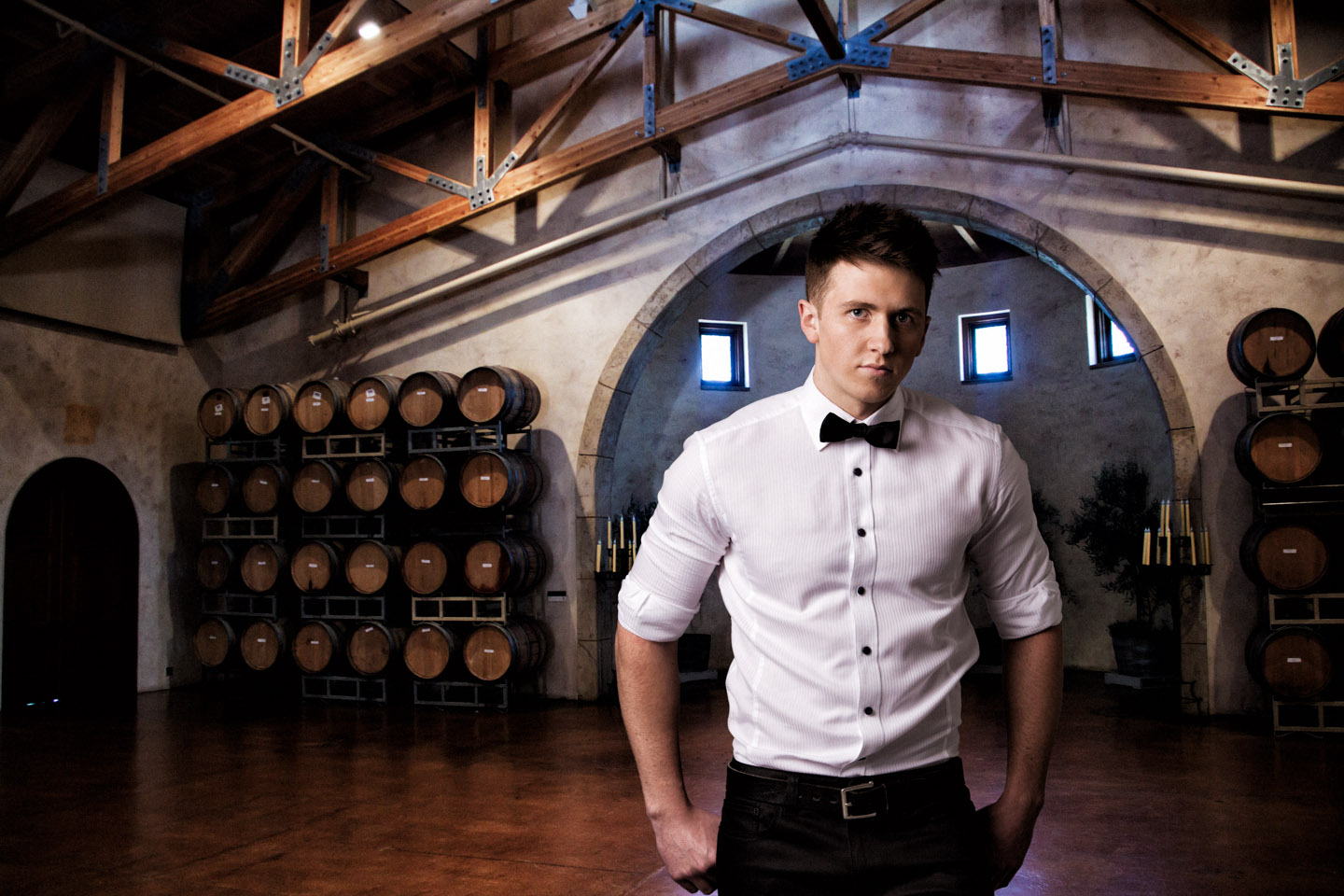 Adding a person to a winery

It can be a challenge finding models. Sometimes you find them at parties or on the street. Since this is practice and practice for art’s sake I can be pretty creative. I photographed a Halloween party and this costumed person dressed as Jigsaw. I had a photographed of the interior of an army helicopter that harkened to the dark green underground vibe of the Saw movies. I titled this “Jigsaw in Afghanistan” or I should have. 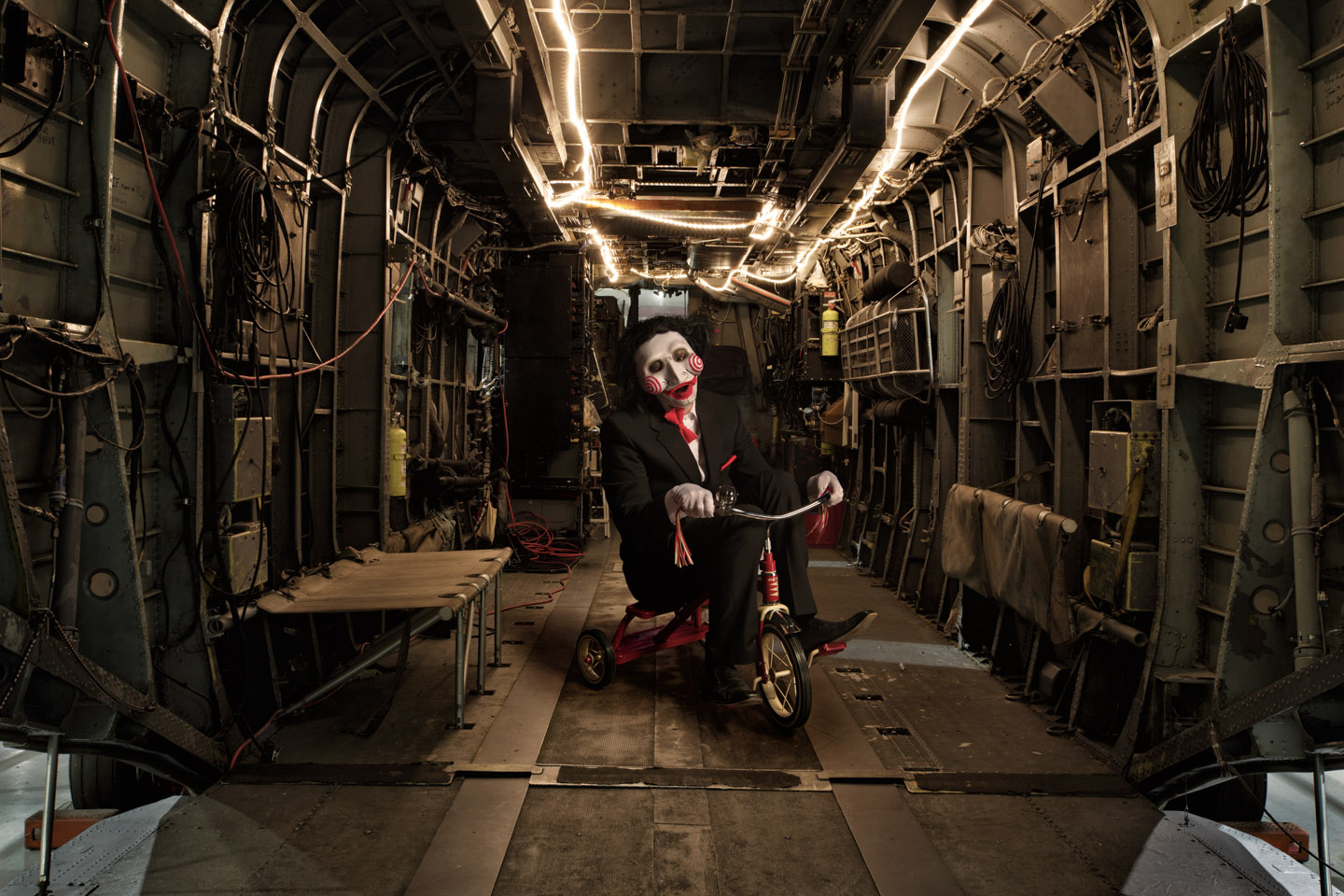 Jigsaw from a Halloween Party added to a spooky scene

The other reason for Photoshop is you never know if you can get a model or person into a particular location. It’d be impossible to photograph a model in a construction scene so you use Photoshop and fake it. 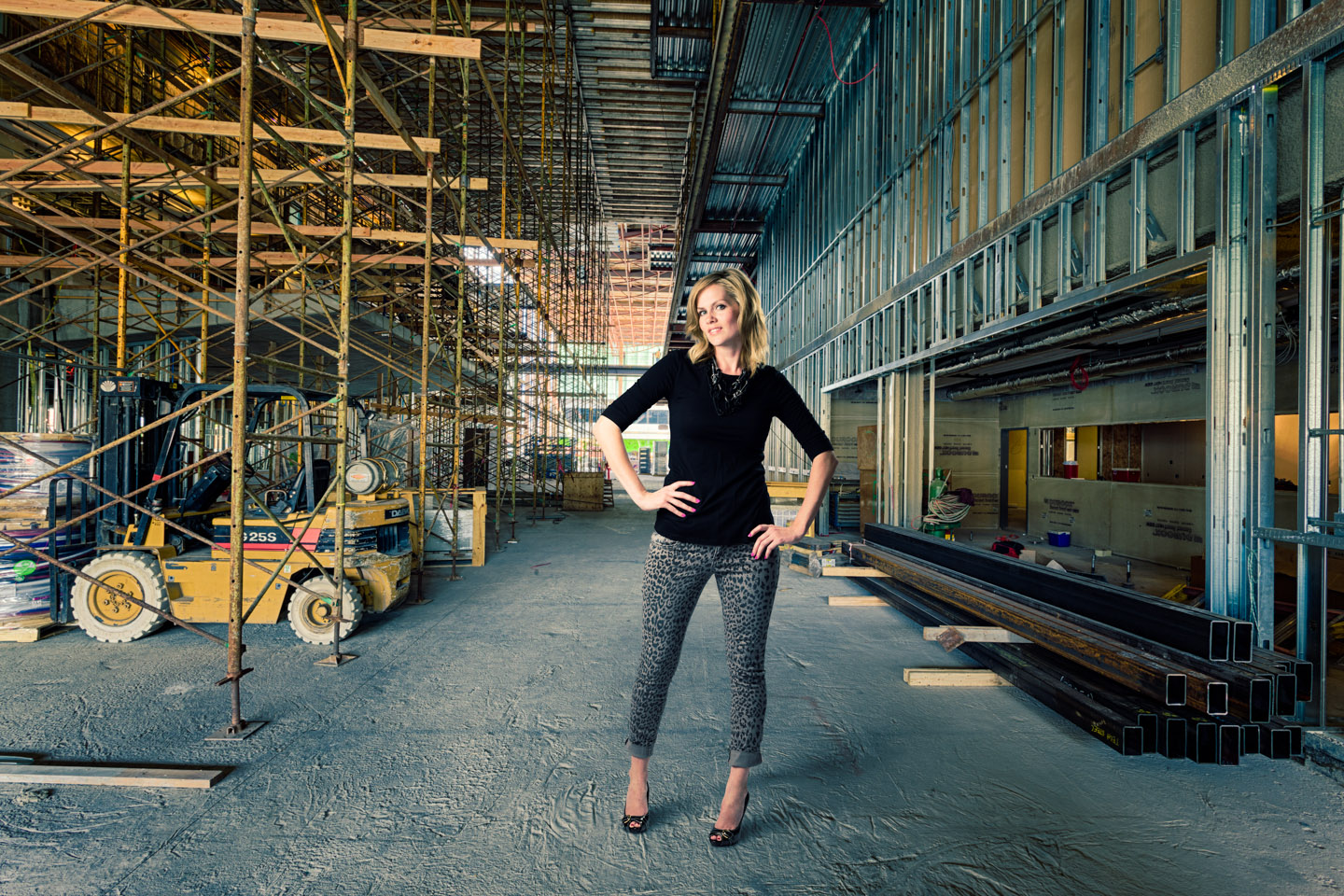 Fashion in a construction zone thanks to Photoshop

The Zombie Walks are a great source of material for subjects. I added this person to an empty field as if they were a lone soldier at dawn. 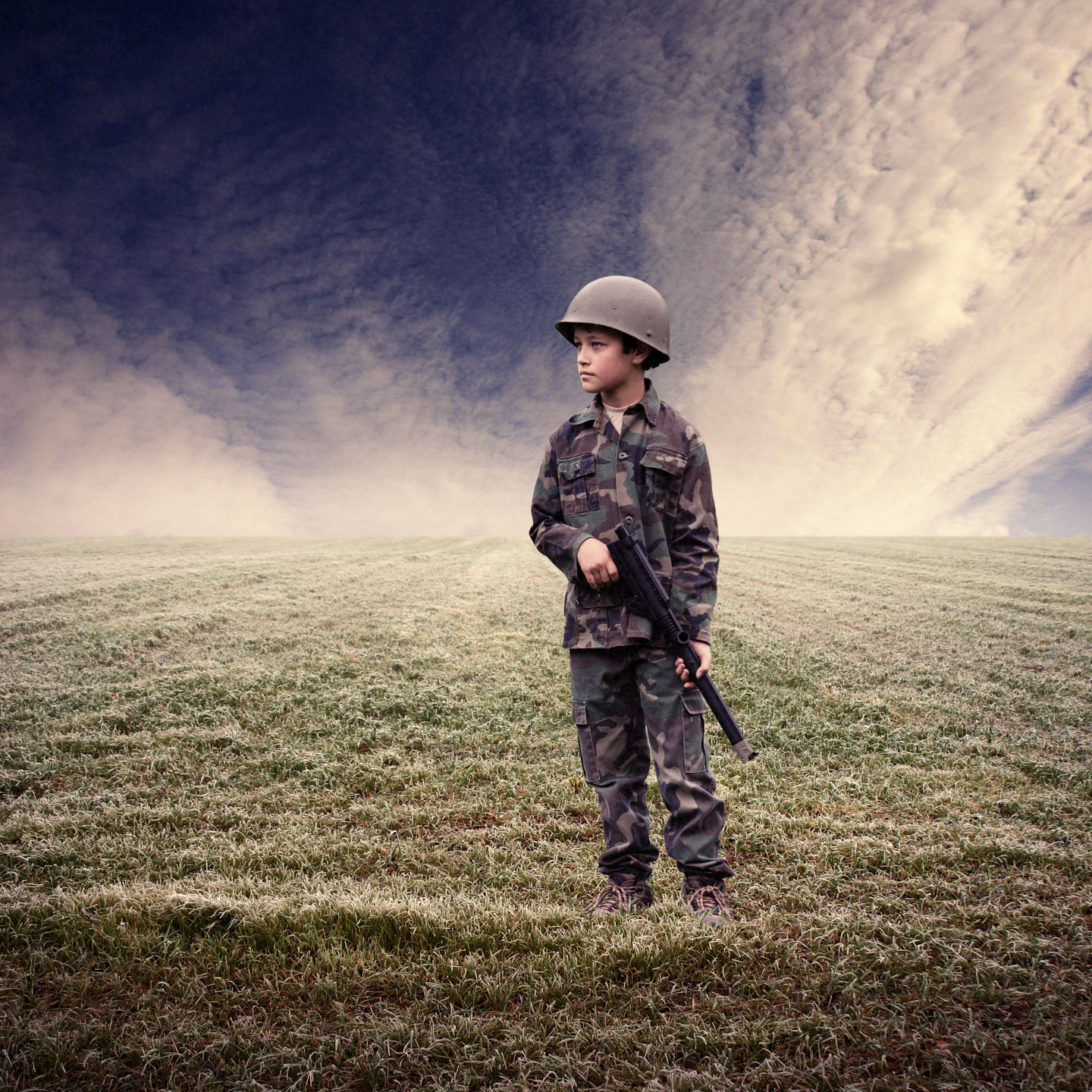 A World War One soldier added to an empty battle field

Selling the idea of compositing to people has been a challenge. It is so much easier to photograph someone in a location and boom, photos are ready. But to photograph them in studio and then change the background is a tough sell. But often the client ends up using the photograph in their promotional material. Robbie has used this photo of him in New York a number of times. The background is a stock photograph that I purchased and it looks great. I wish I was a New York DJ. 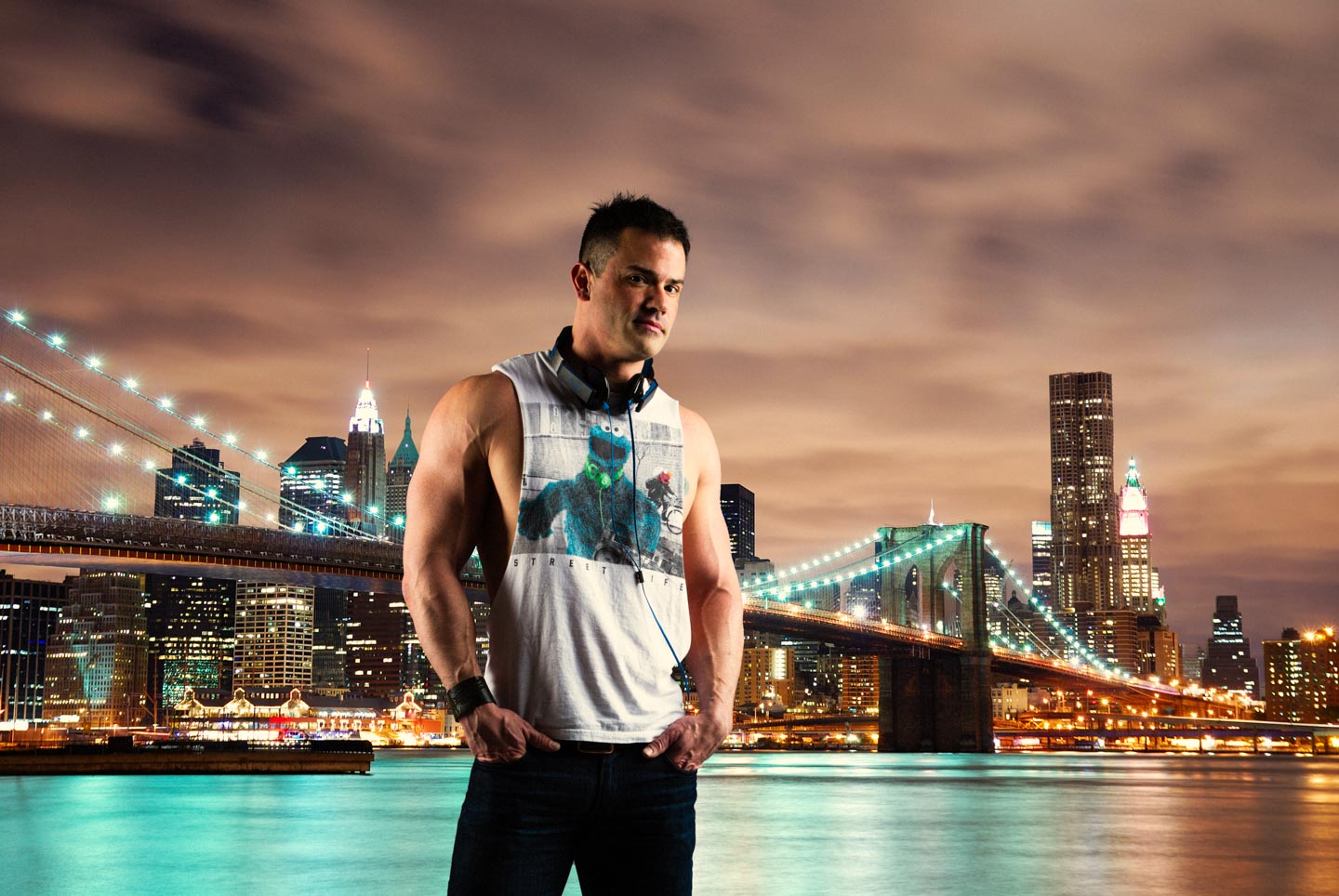 Robbie added to New York to promote his DJ business 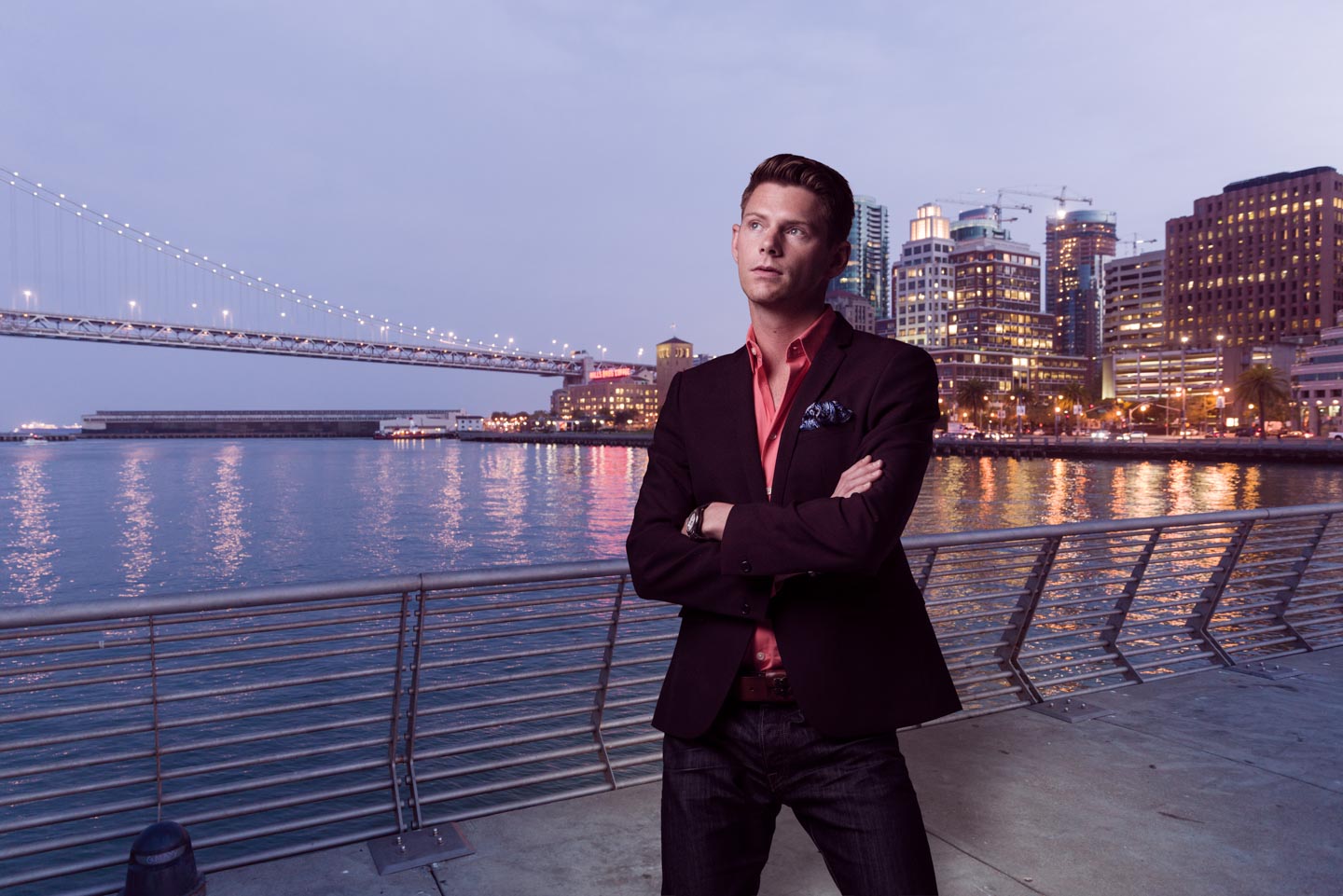 This Spartan warrior was walking in the 4th of July parade. He is actually wearing gym shorts. But we change things and it looks awesome now. The first challenge is to think of a topic or a location and how the subject belongs in the photograph. 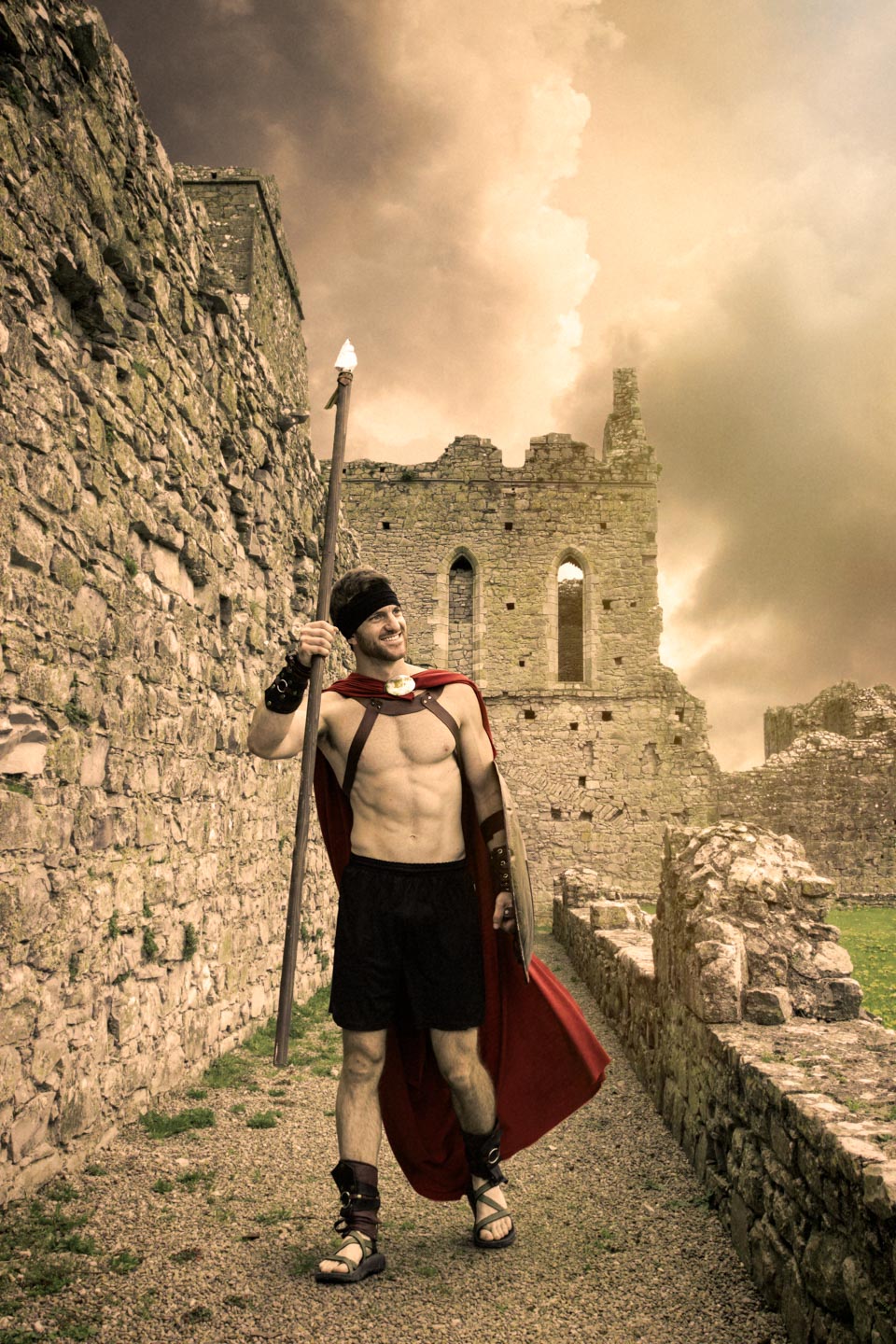 These are just practice shots. Swimsuit lines are often photographed in winter in preparation for a spring/summer release. If you can photograph in studio and add them to sunny beach scenes then you can avoid winter photo shoots outdoors. I’m still practicing this though. I know I’ll nail the look and things are just going to get better with more practice. 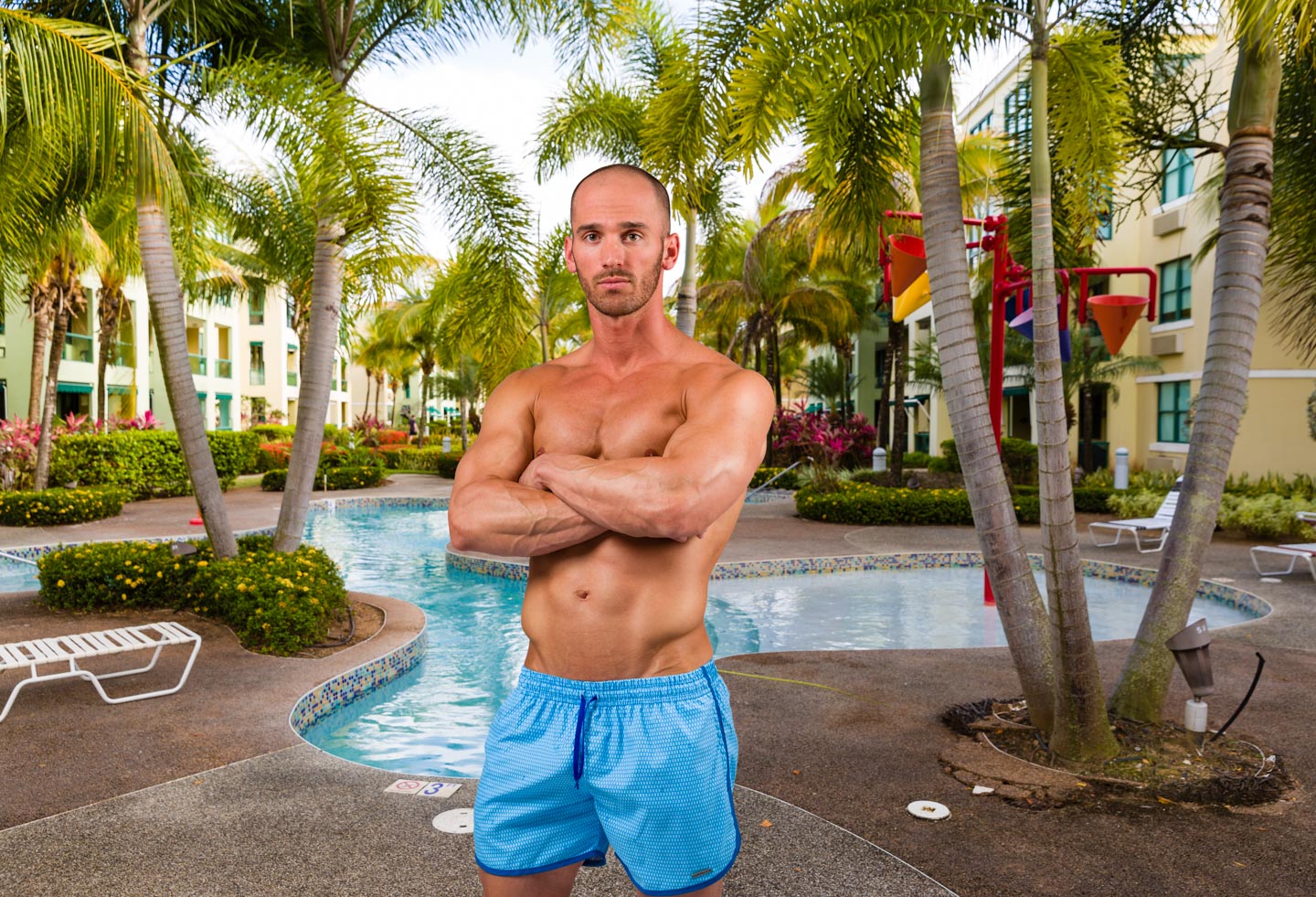 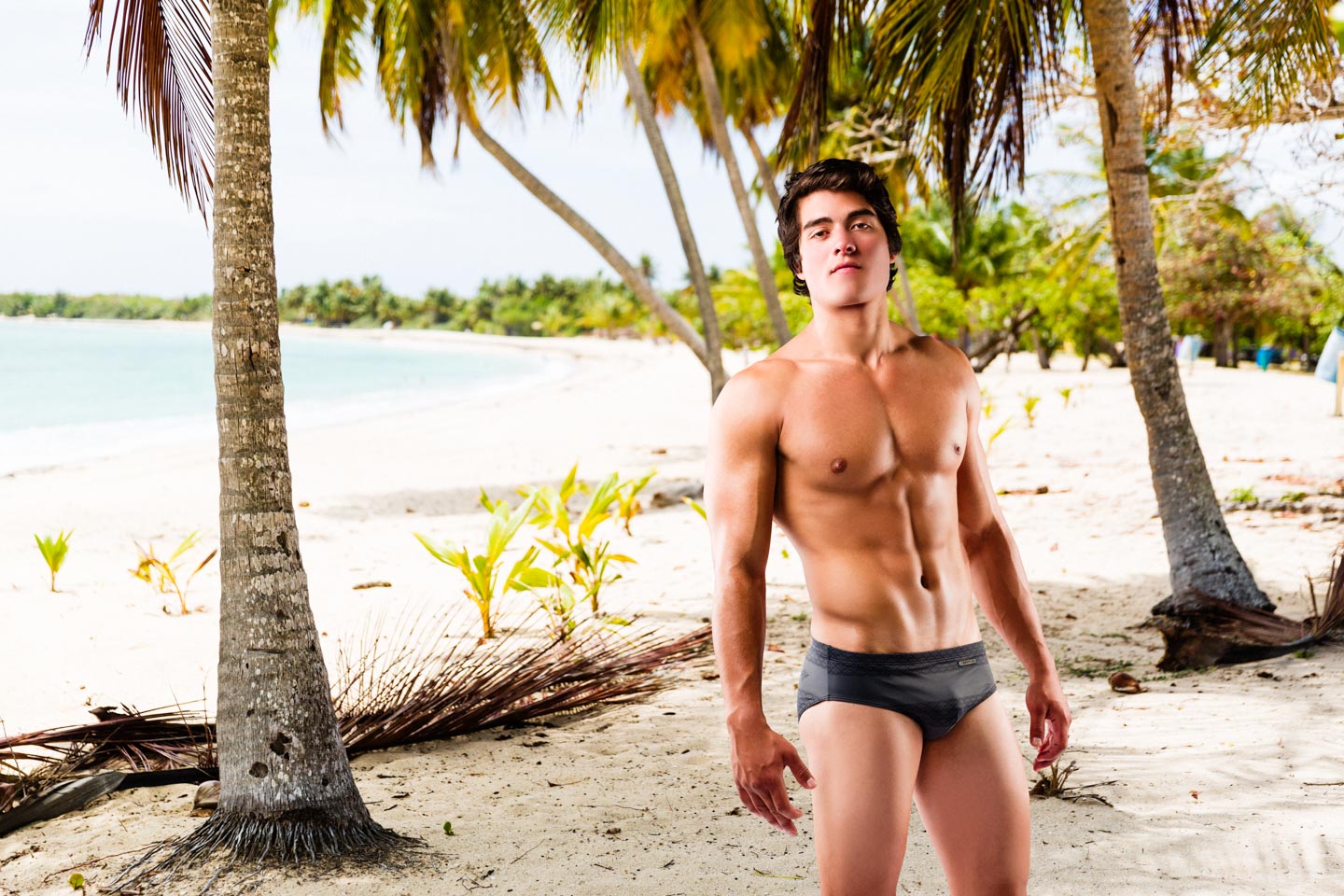 A swimsuit model added to a beach in Puerto Rico

The Moon with Clouds is Pretty, Duh.